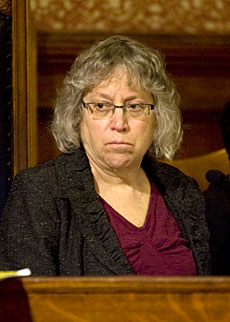 Mayor Henrietta Davis announced this week that Cambridge was to be part of a technology inclusion pilot program. (Photo: Rachel Offerdahl)

Actually, on Thursday she was to go to the Executive Office Building in Washington, D.C., with a team – along with what were expected to be similar teams from Philadelphia, Chicago and Portland, Ore. – to a meeting with Office of Science and Technology Policy officials “looking at ways of closing what we used to call the digital divide and promoting technology inclusion.”

She expected Cambridge to help come up with solutions for ensuring people of all income levels were adept in the technology needed to keep up in the 21st century.  The Cambridge Housing Authority was to be included in the trip.

More details on the trip would be made available soon, said Vivian Graubard, a confidential assistant in the office’s technology division reached by phone Friday.

Cambridge’s role in the pilot project, expected to launch within the next couple of months, came about because Davis was in the “right place at the right time,” namely at a National League of Cities meeting weeks ago with the OSTP’s chief technology officer, Todd Park. “I flung my business card at him,” Davis said at a Tuesday meeting of the School Committee. “And I said, ‘How about us?’”

In preparation for Thursday’s meeting, Davis said she spoke with everyone from Mitchell D. Chester, the state’s commissioner of elementary and secondary education; officials from EdX, the  nonprofit online-education venture founded by Harvard University and the Massachusetts Institute of Technology; and businesses such as Microsoft (and others she was “not prepared to name”).

“It’s made me talk to people at the state – I didn’t do that before when I was working on the digital divide – and made me talk to more people in the business community. Now that I have the word this is a very legitimate issue from the White House, I can say to anyone, ‘We need your help. Let’s all band together and make this happen for our kids.’ It’s elevated the legitimacy of the problem to a higher level,” she said.

There will have to be fundraising, she said, but members of the committee pointed out that it’s no longer that expensive to provide technology to students. Davis mentioned that some communities have given laptops and tablets to every sixth-grader.

The timing of the pilot program is good. Superintendent Jeffrey Young said it was becoming time to craft the district’s next five-year technology plan.

“We’re incredibly well-poised to be helpful, not just for our own students but across the commonwealth and beyond,” Davis said. “It’s a workplace issue, it’s a pipeline for employees. It’s about fairness, but certainly companies are very concerned. They’re asking where are they going to get workers? It’s already a problem.”

“We were already struggling with this issue, and when the White House says it’s important and you’re part of a pilot for the country, then we try even harder, and that means reaching out more to business partners. It gives you the idea of just how serious this is, and we can be part of something special. I’m looking forward to reaching out to business partners and the universities and seeing how we can bend our minds to offering a solution,” she said.