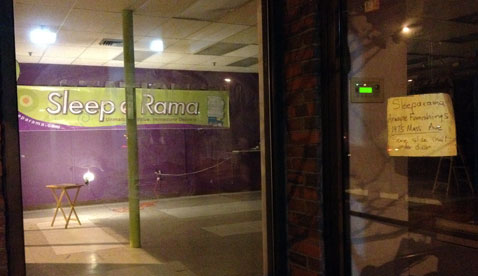 Managers for Sleeparama illuminate a sign advertising the business at its new space in Porter Square. (Photo: Marc Levy)

Sleeparama is adding a store in Porter Square, taking the space last used by Bob Slate Stationer at 1975 Massachusetts Ave. The opening could be as soon as Saturday, according to a Sleeparama staffer.

The family-run mattress chain founded a half-century ago has stores at 1001 Massachusetts Ave., just southeast of Harvard Square, and on Boylston Street in Boston. Those stores should stay open despite the new location, the staffer said.

Its new home is a four-storefront building – three at ground level and one basement space – that was owned from 1979 through November by the Slate family and, in addition to the stationer’s, hosted such uses as bookstores, a toy store and a women’s clothing shop. The stationer’s had a 78-year-run in the city that ended in March 2011, although a branch has since opened under non-family ownership in Harvard Square.

Owner Urban Spaces is expected to raze the 82-year-old, 17,384-square-foot brick building and rebuild it as a five-story condominium building with basement parking.

That can’t happen until the end of the five-year lease held by Miso Market, an Asian grocer and sushi shop that opened August 2011. The lease includes a non-demolition clause, co-owner Stephen Genova said, but there is still an ongoing signature-gathering effort to see if the store can win at least a five-year extension.

Between the soon-to-open Sleeparama and Miso Market at 1963 Massachusetts Ave. is an AT&T store at 1967 Massachusetts Ave. It replaced Stellabella Toys, whose owner Richard Henry said in July that he was moving the store to Davis Square because he expected the building to sell and be torn down. “We had an option to wait it out and see what happens,” Henry said then. “Based on Cambridge real estate and zoning, it’s a pretty good bet that whoever buys that building is going to take it down.”