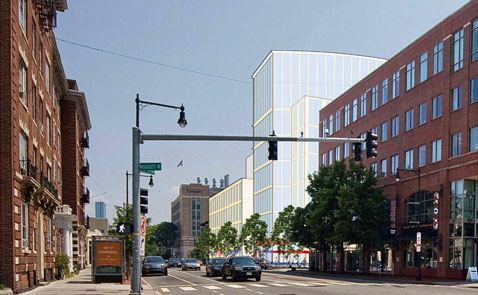 A zoning change allowing design and construction of a large building at 300 Massachusetts Ave. was approved Monday by the City Council.

Despite it already being voted, a developer’s deal to build Affordable Housing in Cambridge within seven years could yet get clarification.

City councillor David Maher sent a letter Wednesday to developer Forest City asking “clarifying language” for what fellow councillors Minka vanBeuzekom and Craig Kelley saw as a loophole in an agreement letting the company put up a massive headquarters building for Millennium Pharmaceuticals near Central Square.

“I am doing this to resolve any ambiguity regarding the issue that was discussed Monday night regarding ‘investment and sponsorship’ of the affordable-housing units,” Maher said.

The council voted at that time to accept a letter of commitment from Forest City and grant a zoning change allowing a 246,716-square-foot building reaching 95 feet high at 300 Massachusetts Ave. The agreement says Forest City will also produce affordable housing – the goal is 25 units – or pay a penalty of at least $6.2 million.

But vanBeuzekom and Kelley worried that the “investment and sponsorship” option let Forest City spend an indeterminate amount of money on another company’s housing project, fulfilling its obligation but possibly resulting in fewer homes for low- or moderate-income people in Cambridge.

Resident Charles Teague had been sounding the alarm on the loophole for weeks, before even the councillors raised the issue.

The council approved the zoning before clarifying the language. The sole vote against accepting the letter of commitment was vanBeuzekom’s. The zoning change went through unanimously.

In a letter to Kathryn Brown, vice president of legal affairs for Forest City, Maher asks the company to clarify the language now:

That amount is $5 million to be paid to the city’s Affordable Housing Trust, adjusted in proportion to increases in the consumer price index or a increase of 3 percent per year, whichever is greater. Forest City’s seven-year production period starts when the city issues a certificate of occupancy for 300 Massachusetts Ave.

“I would request that you confirm in writing that Forest City is in agreement with the City Council’s understanding of this provision so that I may include such correspondence in the files of the Ordinance Committee and other relevant city departments,” Maher says to Brown in the letter.

Update: Brown replied Monday, March 4, that the developer’s “understanding of its commitment … is consistent with the City Council’s understanding as described in your correspondence.”