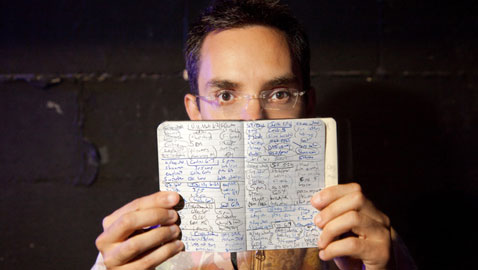 Comedian Myq Kaplan moved to New York, appears with Conan O’Brien, Craig Ferguson and David Letterman, was a finalist on “Last Comic Standing” and has his own “Comedy Central Presents” special, but he can’t knock the Boston habit when it comes to recording.

In December 2011 he did two nights at ImprovBoston in Central Square taping the “Please Be Seated” album with Micah Sherman. Now Kaplan, once a frequent presence at Cambridge comedy clubs, is coming to The Wilbur Theatre, 246 Tremont St., Boston, to film a one-hour comedy television special.

For that he needs an audience.

More information and the sign-up form is here.  Kaplan’s podcast, “Hang Out With Me,” is here – and, while seemingly every comedian has a podcast (in fact, he decided to have one because “after surveying the internet landscape, I noticed that none of the podcasts that exist already were mine”), Kaplan’s is notable in that it was funded by a $1 Kickstarter campaign that people overfunded by $995.

“Why only a dollar? Aren’t podcasts more expensive than that? Shouldn’t they be?” Kaplan asked at the campaign’s launch. “One dollar will indicate that there’s interest from at least one person to hang out with me, which is all I need. And if we raise more than the one dollar, that money will certainly come in handy to put towards all the other podcast costs (podcosts?).”