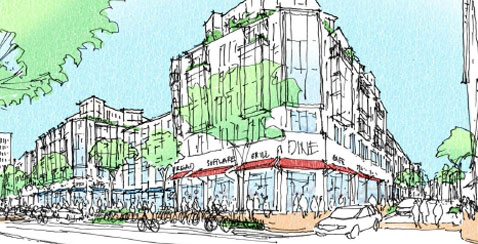 The zoning proposal remaking Central Square with taller buildings, more people and a modified mix of public spaces and businesses could be presented “prior to the summer meeting” of the City Council, said Iram Farooq, a planner with the Cambridge Development Department.

That gives the start of a likely zoning battle – given tensions over recent zoning discussions in the square and resulting creations of two citizens groups – a roughly four-month window.

The council meets roughly every Monday through June and picks up its regular schedule on the second Monday in September. What is meant to be its sole summer meeting was held July 30 last year.

Farooq gave the estimate Wednesday at a roundtable held by the council’s Ordinance Committee to hear a plan presented by Goody Clancy, the consultant hired in April 2011. The plan was crafted by Goody Clancy with participation by the 21-member Central Square Advisory Committee and the Mayor’s Red Ribbon Commission on the Delights and Concerns of Central Square, which began its work August 2010.

“We’ve started to talk to the Planning Board about the zoning recommendations that have emerged here and will be working with them over the next few months,” Farooq said.

The suggestions that don’t include zoning – programming such as bringing in festivals, encouraging buskers and creating public art and interactive installations – are being worked on already in conversation with the city manager’s office, city arts council, departments of Public Works and Human Services, other departments and business organizations, she said, offering to come back to the council with reports if it was wanted.

Roundtables are intended to give councillors in-depth understanding of complex topics through frank discussion and dialogue with experts. Under council rules, they don’t take public comments or allow votes and are not televised by the city. The roundtable was filmed by The Tech and Cambridge Day and posted on YouTube by The Tech’s John Hawkinson:

It was kept to a tidy two hours, after a Kendall Square roundtable held Friday ran to more than three. Roughly three-quarters of the Wednesday roundtable was spent going through Goody Clancy’s report, “Central Square: Nurturing culture and community in Cambridge’s downtown.”

Among other things, the report urges more mixed-income housing that would be made possible by raising heights in some parts of the square to up to 160 feet from the current 80. Along Massachusetts Avenue, though, facade heights would by limited to up to 60 feet to avoid giving the avenue a canyonlike feel. Some of the new residential units could come by building atop what are now city parking lots, as well as a change to the rule that there must be one parking space for each housing unit built.

David Dixon, principal-in-charge for Goody Clancy’s planning and urban design practice, described a model used in other cities in which the consultants have worked: a half-space per unit so long as they are within walking distance of mass transit.

If a Central Square reimagined with new amenities and more retail is to succeed, there would have to be between 1,000 and 2,000 housing units built within the next five to 10 years, Dixon said, with “probably closer to 2,000 feeling right for many of the things the committee supported.”

“From Red Ribbon to C2 have come the real new idea [of] middle-class housing you can have today. Post-rent control, I didn’t think we could ever have it,” said councillor Ken Reeves, who launched and led the so-called K2C2 process for rebooting Kendall and Central squares. “But we have to spend a lot more time on the idea” and bring in the right experts and academics to make it happen.

Dixon confirmed that the new units would be ideally within a five-minute walk of Central Square. In Kendall Square, city planners looked to areas within a 15-minute walk for supporting new retail and amenities there, and a current Massachusetts Institute of Technology plan – the only proposal on the table there – includes only 300 units. “Five-minute walk, less [with] a 10-minute walk, very little beyond that is where you can really make a difference with housing,” Dixon said.

New housing could also be possible through “in-fill” of spaces along Massachusetts Avenue, Farooq said. In turn, Dixon said, the city’s parking lots could become public open spaces. He talked at some length about improving and expanding the look, feel and programming of the square’s open spaces, including Carl Barron Plaza, University Park Plaza and Jill Brown-Rhone Park.

Retail and services, meanwhile, could be expected to become smaller and begin creeping down side streets away from the avenue as a way to enliven them and serve as a link to nearby residential neighborhoods. A cap on fast food could be lifted and “market stalls” created to encourage more small eateries and merchants, while zoning against “formula retail” would discourage chain stores from coming to the area.