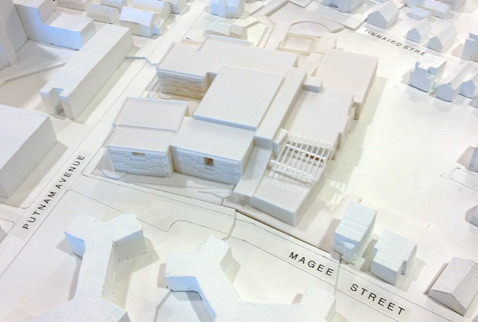 A new Martin Luther King Jr. School got its special permit Tuesday in a unanimous vote from a Planning Board whose main concern seemed to be the color proposed for the two-school campus.

To serve a dual population of K-5 and middle-school students, the 169,000-square-foot school at 100 Putnam Ave. will have separate entrances, two play areas, two gyms, a courtyard, an auditorium, breakout teaching areas and an outside teaching area and a turf field in and around four floors, peaking at 63 feet toward its middle, that includes a 69-vehicle underground garage. It was also presented by architect Mark Boyes-Watson and the firm Perkins Eastman with a color that reminded Planning Board chairman Hugh Russell of “pumpkin Jell-O,” and Russell wasn’t the only one who mentioned it.

Tear-down of the current school is imminent, and the new version is due to open September 2015 after its $84.5 million, city-funded design and construction process.

The designers have two months to deal with the school’s color before starting a design review process with the Community Development Department, Boyes-Watson said.

During that time they’ll have another issue to address: Residents’ surprisingly specific fixation on whether the school should have a full or half basketball court on its Kinnaird Street side.

Jeff Snyder, a Kinnaird Street resident, brought a 170-name petition to the Planning Board to protest the noise and activity a full court would bring to an area across from people’s homes – and bedroom windows.

But that brought other longtime residents to the lectern for public comment to explain the court’s importance to local kids and argue that the neighborhood already controlled action around the court adequately. “I don’t know what this petition is,” said Sandra Graham, of Western Avenue, suggesting that names for it were gathered selectively. “A petition went out and we didn’t know of it. I don’t think that’s fair at all. These are children who need a basketball court. [And] I see none of these people at the playground. I’m sure I could go out with a petition and gather signatures too.”

Other residents also threatened to form a pro-court petition, and there was a hint of class warfare in the exchanges as well as an assertion a full court was part of a promised curriculum.

Ultimately, the court is likely to stay as it is – despite concerns of Kinnaird Street residents raised during the design process – in part because moving it makes a soccer field impossible, said Perkins Eastman principal John Pears. But the design widens the street and sidewalk to add distance between the court and neighbors’ homes, and it shields the court with year-round trees to absorb noise.

In addition, the court is unlit, making games or gatherings as people are trying to sleep much more unlikely, Pears said.

Deputy City Manager Richard C. Rossi confirmed there would be an additional process, with input from police, to decide the court’s hours of operation. “It does not end with today’s meeting. I foresee – unfortunately – many more meetings,” he said to laughs. “Over the years we have learned how to do this successfully.”

“We think the design is basically set,” Boyes-Watson said. “What we have tonight basically is the design of the building.”

Steve Cohen, a new board member, was surprised by the specifics of the debate taking place during public comment. “This is a special permit for FAR and height,” he said, referring to the board’s special permit powers, including oversight of floor-area ratio.

Russell and the other board members had a handful of concerns, including the lack of windows on Putnam Avenue, but Pears explained that the building was a net-zero-energy structure and its interior design and placement of windows was vital to keeping energy use contained. Even if windows were added, they would have to be screened from invasive sunlight, defeating some of the purpose.

Generally the board applauded the work, with Steven Winter calling it “just brilliant … top-of-the-line, world-class design” that fit a lot into a small space and Pamela Winters, a one-time student teacher at the Putnam Avenue school, gushing, “This school is so much better than the one I taught in in 1975.”

Even Snyder agreed after the meeting that “This school is well-designed. We’re down to the nitty-gritty.”

After the Putnam Avenue school is on its way to completion, the city has two more dual-school campuses to rebuild: an $81 million King Open School project at at 850 Cambridge St. that the city may have to pay for itself after the state rejected its request for aid; and a reworking of the Tobin School at 197 Vassal Lane that may yet get state funding.

A public hearing on a 107-unit project proposed for 240 Sidney St., 40 Allston St. and 618 Grove Ave. and a developer’s request for less parking than is usually required was scheduled for Tuesday, but delayed because the board had only five members on hand instead of the usual seven.