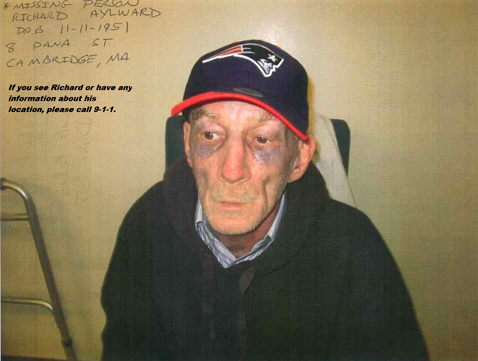 Cambridge police are asking help with finding a missing person: Richard Aylward, 62, who walked away from MIT Mayor’s Senior Picnic on Vassar Street at about 1:20 p.m. Wednesday.

Aylward lives at the Cambridge Nursing Center at 8 Dana St., but until about a month ago had been living in Somerville. He could be found in Cambridge, Somerville or surrounding areas, police said.

His speech is limited, and he suffers from mental illness.

Police are asking members of the public that if they see Aylward, or have information about his whereabouts, to call 911 or call Cambridge Police at (617) 349-3300.