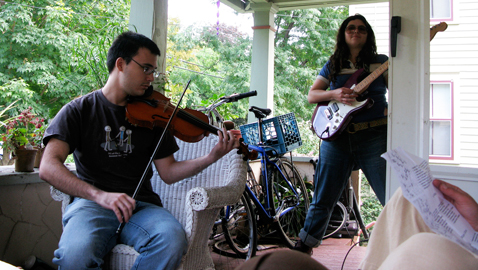 “There are a thousand bands right here in Boston; you shouldn’t have to listen to someone from New York or L.A.” That’s the no-nonsense attitude of John Dorrell, co-founder of local music website MuzicLab and host of one of this weekend’s many PorchFest concerts.

A “decentralized music festival,” PorchFest was started in 2011 by the Somerville Arts Council as a way to gain exposure for local musicians while building a sense of community for listeners. Dozens of porches, stoops and yards throughout the city will host live, local music from noon to 6 p.m. Saturday. The Somerville Arts Council website likens the afternoon to an Open Studios event, as multiple acts will be performing simultaneously in different places, and listeners can visit as many or as few locations as they choose.

With this many acts and venues, there will be some real variety not just in sound but in atmosphere. Each host porch will have its own version of entertainment, ranging from the minimal to the extreme. Events will include live music of all kinds, and at least one yard sale.

One of the more serious parties in town will no doubt be held at 366 Summer St., near Davis Square, where some of the featured artists on Dorrell’s website will be performing between 2 and 4 p.m. and complimentary hot dogs and lemonade will be provided to reinvigorate weary travelers.

The “headlining” band at Summer Street is Educate the Antidote, a trio with the rowdy energy of the Black Eyed Peas, playing oh-so-danceable tracks such as “Rise Up” and “Superstar.” Complementing Antidote’s edge will be such acts as Happy Little Clouds (yes, that’s a Bob Ross reference) who are somewhat like a less angry Florence and the Machine, and the calmer but no less fun intimate acoustic sounds of Ryan Alvanos. Think of him as a folk version of Jack Johnson.

Before venturing out, be sure to print this handy map of where and when events will take place. The afternoon is staggered in two-hour slots so that you start over near McGrath Highway and work your way gradually west.