‘The Iceman’: Potentially titillating, but tale of suburban killer for hire leaves you cold 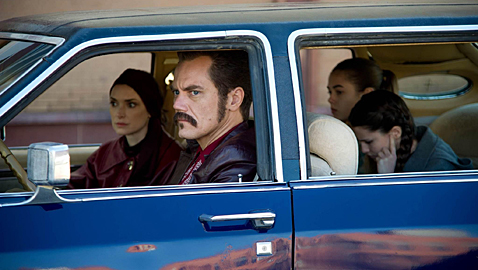 ‘The Iceman’: Potentially titillating, but tale of suburban killer for hire leaves you cold

Back in the ’60s there lurked a semi-notorious hit man by the name of Richard Kuklinski who was known as “the Iceman” for his detached demeanor. Allegedly he killed more than 100 people while in the employment of the mob over three decades. Pretty pat stuff for a homicidal sociopath who enjoys gruesome grunt work, but what makes Kuklinski intriguing is that he did it while married and living a suburban existence, replete with two teenage daughters. Whitey didn’t have those numbers or a family. 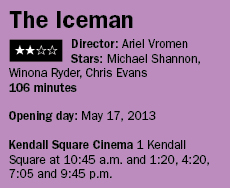 Comparisons to “The Sopranos” or “Goodfellas” are more than fair, especially since “The Iceman” does feature ’prano  John Ventimiglia and ’fella Ray Liotta, but this is Michael Shannon’s show. As Kuklinski he’s aloof, repressed and always about to explode. The hook is he’s awkward socially, most notably when he first meets Deborah (Winona Ryder), the woman he will marry, but after a pool hall game where an opponent briefly derides her as a “virginal cock tease,” Kuklinski slips into the heckler’s back seat and cooly slits his throat.  Never mind that he has no problem blowing away a friendly bum as a screen test for a mob heavy (Liotta) who had formerly employed Kuklinski as a porn distributor.

For such rich material, writer/director Ariel Vromen plays it straight – so straight, that by the middle of the film, everything potentially titillating about being inside the mind and dirty deeds of a professional killer begins to feel old and stiff, like one of Kuklinski’s victims on ice.

Shannon (“Revolutionary Road” and “Take Shelter”) never really had to carry a film before like he’s asked to do here. He’s up to the task, as are Ryder and Liotta, but the one real nugget in all the mundane murderous mayhem is Chris Evans, Captain America himself, as a balding, bad-hair-day hit man who goes by the handle Mr. Freeze because he operates out of an ice cream truck. It takes a while to realize it’s Evans too, not because of the retro hairdo that could make him a lost member of the band Boston back in the day, or not because he’s not hunky; it’s because he’s really acting. James Franco too pops up for about 20 seconds and is gone, just like one of Kuklinski’s victims – and just like this movie will become, a could-have-been ghost in the taillights of gangster greats.