Rankings award Cambridge Health Alliance an A, while MGH gets a B

Rankings award Cambridge Health Alliance an A, while MGH gets a B 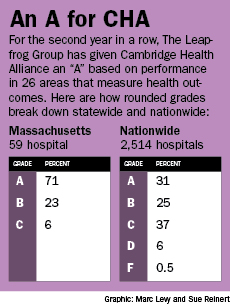 For the second year in a row, Cambridge Health Alliance earned the top grade in patient safety from a national employer-sponsored group that rates hospitals, although even hospital officials acknowledged that the grade isn’t unusual in Massachusetts.

The Leapfrog Group, established to reduce health costs by pushing hospitals to improve quality of care and steer patients and insurers to top-rated hospitals, gave the Alliance an “A” based on performance in 26 areas that measure health outcomes including infections and hospital processes such as use of electronic drug orders.

Dr. Gerald Steinberg, chief medical officer of the Alliance, told its board of trustees Tuesday that the “A” score this year “is fairly common [in Massachusetts] but not in the rest of the country.”

The grade “is important to our public profile,” he said. In addition, the individual measures used in the grading “are increasingly being used by various [private and public health insurers] to calculate pay for performance,” increased reimbursement for meeting performance goals.

Hospitals are graded by a number of public and private groups, and the results can vary depending on the details. For example, Medicare is penalizing the Alliance this year for not meeting standards in areas such as patient satisfaction, quality of care and the number of Medicare patients who return to the hospital within 30 days of being discharged.