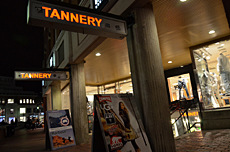 The former site of The Tannery in Harvard Square is set to become a restaurant and jazz club called Beat Hotel. (Photo: Michael Kappel)

The 328-seat brasserie coming to Harvard Square has a name: Beat Hotel.

Originally referred to as Liberal Servings by restaurateur Jack Bardy, the Brattle Street eatery now appears as Beat Hotel on a name-change request to be heard Tuesday by the city’s License Commission. An alcohol license is pending at the state level.

Update: The commission granted the name change to Beat Hotel. Attorney Sean Hope, appearing before the commission for Bardy, said the alcohol license approval was expected “in the next week or two,” but he didn’t have an anticipated opening date for the restaurant.

The bid to replace Harvard Square’s shuttered Tannery clothing store at 11a Brattle St. with a restaurant and venue for jazz and poetry began with an April 3 visit to the commission, where he had plenty of support by fans of his South End venture The Beehive. But by October he knew he wanted a name other than Liberal Servings.

While Bardy has said music at the site “will be tasteful and appropriate to the neighborhood. The idea is to provide primarily live ‘background’ music such as a jazz quartet that complements the dining atmosphere without being overwhelming and noisy,” the name change and more recent comments by music director Bruce Ferrara suggests a shift in emphasis.

Ferrara told The Harvard Crimson last year that he hoped to help return a vibrant music culture to Harvard Square. “It used to be exciting and interesting and inspiring. It really hasn’t been that way for 20 years,” he told Crimson writer Kerry M. Flynn.

Jazz is also played four or five nights a week in Regattabar, in the square’s Charles Hotel, but the club has a reputation as upscale and more likely to host touring national acts.

Reports that Bardy’s restaurant and nightclub would open this spring – possibly in April – weren’t borne out, but Bardy is likely to be asked details on size, menu, hours and music Tuesday by the commission.

The License Commission meets at 6 p.m. Tuesday in the basement of the Lombardi Building, 831 Massachusetts Ave., Central Square.