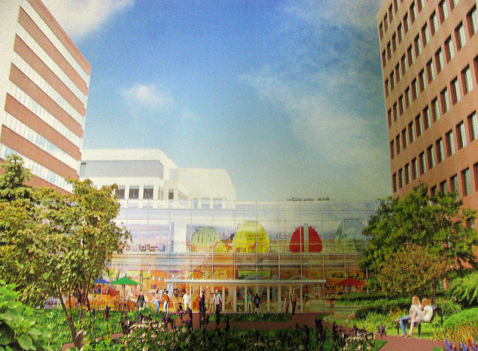 A rendering from Boston Properties shows a two-story Google connector building replacing much of a rooftop garden in Kendall Square. Not shown: the massive residential tower to be built behind it.

Things aren’t coming together as promised at the Google connector building that cost the public 42 percent of a rooftop garden in Kendall Square, and it’s the Cambridge Redevelopment Authority – which approved the plan amid public outcry – complaining about it, albeit without much power to do anything about it.

“I’m going to remember and be disappointed or unhappy with the assurances I think we were given as a board if” they turn out not to be true, board member Chris Bator said Wednesday, reminding a representative of Boston Properties, which is Google’s landlord at 3, 4 and 5 Cambridge Center, that “similar kinds of issues may come up again with regard to Google or others.”

Perhaps muffling their outrage a bit was the fact that of the five, only two members have actually seen drawings of the direction Google is going inside the glass-walled, two-story building, which paves 18,147 square feet of garden to connect space Google already occupies in two buildings on either side of a parking garage. With the buildings linked, Google will have two very large floors of workspace and, at least for a while, it’s very own 5,000 to 6,000 square feet of garden space. (If Boston Properties builds a promised residential tower on Ames Street, tenants of the building will have access to the western garden as well, while the public keeps the remaining 25,340 square feet on the east side.)

Those two members, Barry Zevin and chairwoman Kathleen Born, described a connector structure filled with first one, then two “black box” meeting areas that could be pushed against the walls – “it’s an odd choice to build a glass wall, then [add] a meeting room you’re probably going to have to darken often,” Zevin said – as well as other “opaque” objects.

“Right now, it’s a totally transparent space, you can see right through it. But it’s not going to stay that way,” Zevin said.

To board members, that clashed with the image presented to them of a glass connector building designed to be seen through.

“I view myself as having had essentially an assurance from Boston Properties, to put it in perhaps not sophisticated planning concerns but broad terms, that the views from the park through the connector would be reasonably attractive and pleasant and fine,” Bator said.

Of course, there’s a big reason why that the view as seen in the rendering won’t happen: To get the rooftop garden space, Boston Properties swore it would build the residential tower on Ames Street. The tower will seal off the sky behind the connector building, but isn’t shown in the drawing.

While Boston Properties Senior Project Manager Kevin Sheehan reassured the board that the interior design still wasn’t set, with Google workers’ dissatisfaction with the current proposal a reason there were still no reliable designs to be shown, Zevin saw the outside-in approach to construction as the inherent flaw in the process. “If we were ever to be involved in a new building, it would be much better to design it from the inside out than to go through this miserable process of trying to cram your working space into a predetermined box that we have had no chance to reflect on or to enhance or help,” Zevin said. “It’s a shame. It could be much better had the exterior envelope been able to respond to the actual needs of the tenant – which is really sort of weird, because the tenant was there from the beginning. This was not a speculative office space.”

The Google deal happened at a breakneck pace for Cambridge city government. City Manager Robert W. Healy appeared before the City Council on Feb. 27, 2012, saying the council had to approve the plans quickly because of its “timeliness,” but the council turned Boston Properties and Google away – for a month. Councillors approved the plan March 19 after rapid meetings with such groups as the Kendall Square Association, of which Google’s main pitchman for the project served as vice president, and the East Cambridge Planning Team, whose approval of the plan is still controversial and debated.

The Google executive, Steve Vinter, charmed members of the East Cambridge Planning Team at a March 14, 2012, meeting at which he told a story about visiting Google’s New York offices and being struck by their massive openness, with a sole enclosed meeting room workers had to walk great distances to get to.

“That’s just an extreme example of how much we value large floorplates,” Vinter told residents at the meeting. “And this … isn’t just because we like it; it’s because it’s core to our culture and how we collaborate and it’s what makes us successful.”

Born said she, Zevin and Roger Boothe of the Community Development Department “were a little surprised when we saw the drawings” of what was now imagined for the connector building. While confessing that the preliminary, still conceptual nature of the drawings made it hard to tell, Zevin said it was simply not suggestive of what Vinter had described to residents and Boston Properties executives had affirmed to the CRA.

“The form of the building was said to be necessary because there was a need for wide, unobstructed open space. That, in fact, did not happen … Just a matter of historical note so the next time someone presents to you, you ask the right questions,” Zevin said. “There was a proposition about the spaces being so wide, and the objection as I understood it was that we can’t [change it] because we have to be able to see straight through and wave to the guy 500 feet down to collaborate – which I never quite understood, and it turns out that isn’t the way it is.”

The council also bought Vinter’s tale of needing to adapt Google’s physical space to its work culture. Councillors voted 7-2 to let the plan go forward, even ignoring warnings that the CRA lacked a board. Those warnings turned out to be true; it was discovered there had been no board meetings for some 30 months, meaning that the plan voted on was the sole product of the authority’s rogue executive director, Joseph Tulimieri, and the developer.

As a board was hurriedly appointed, Tulimieri said in April that the new members could kill the Google connector project if they wanted. Instead they opted to let it continue and look at the quality of its various parts.

Even at the time, Bator said to Boston Properties executives, “It seems to me that if you’re already fencing off portions of the garden you’re taking, it renders somewhat moot responses to the design comments we’ve had. It treats it as an exercise of form over substance.” When the board made design suggestions, Boston Properties simply shrugged them off.

On Wednesday, Born remembered their start on the project this way:

Speaking to Sheehan, she said, “I’d like you to invite Google to look at the rendering we approved and try to come to us with an interior floorplan that has some resemblance to the interior you see in the renderings.”

Bator took a similar approach, saying, “It seems to me the public interest in the view from the park is obvious, and certainly Google should easily recognize that our request is a very modest one. I hope we would get some reasonable response.”

The board’s new executive redevelopment officer, Tom Evans, suggested there were ways the board could see schematics suggestive of how the space would be used “that may not be damaging or leaking any particular internal organizational secrets.”

The board’s legal counsel, Jeffrey Mullan of the law firm Foley Hoag, suggested that the board tell city inspectors it was okay with the issuance of a temporary certificate of occupancy for Boston Properties so Google could “advance the interior fitout” and give the full board more to look at by its July meeting.

Oddly, although Mullan’s motion was a substitute for what the board expected to be voting that night, the Boston Properties representative happened to have a letter on hand reflecting it. Further, Sheehan explained how the the substitute motion had been anticipated:

“We had talked to Tom about this possibility and prepared a letter,” Sheehan told the board, to more of its by-now classically inappropriate laughter.