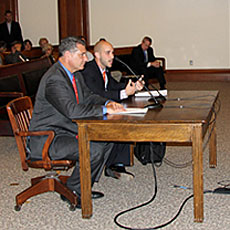 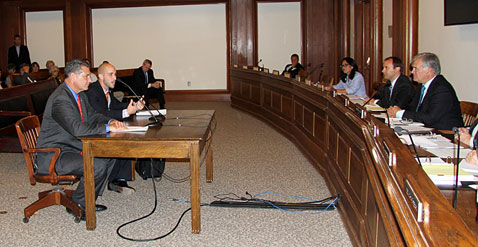 The push to form a special commission to find sites for a permanent Middlesex Jail will not delay the moving of prisoners out of the former Edward J. Sullivan Courthouse in East Cambridge, said state Rep. Marc T. Lombardo, a Republican from Billerica. But it will give hope to the town, which will host at least 230 inmates from Cambridge until a replacement hail is built.

“It is imperative that a new location for the Middlesex Jail is found quickly and without delay. I want to make sure that housing of inmates in Billerica is truly temporary,” Lombardo said Wednesday at a Beacon Hill hearing of the Joint Committee on State Administration and Regulatory Oversight.

The committee, holding hearings on bill S1477 to create the special commission, also took testimony from Middlesex Sheriff Peter J. Koutoujian, who described the result he expected from the commission’s work: “A location that makes the most logistical sense.”

“It is in the best interest of public safety for our officers, the inmates in our custody and the citizens of Middlesex County that the jail be in close proximity to 12 of 14 courts we serve,” Koutoujian said.

The 22-story East Cambridge eyesore was built in the 1970s to host not just a 160-person jail but Middlesex Superior Court, which moved to Woburn in 2008, and Cambridge District Court, which moved to Medford the next year. Now only the prisoners remain in the asbestos-ridden building – at times reaching numbers of more than 400 crowded into the top four stories, although a judge last month ordered that number capped at 230 after an overcrowding complaint lawsuits filed by Prisoners’ Legal Services, the ACLU of Massachusetts and private attorneys.

Developer Leggat McCall deal is to transform the building into offices and some residential units in a deal expected to close in January. The $200 million renovation is expected to begin in the first quarter of next year, led off by extensive asbestos abatement, and be done in the final quarter of 2015. The developer’s bid for the building won’t be revealed until the deal closes.

Under the order by Judge Bruce R. Henry, many of the people held in the jail will be moved to the Billerica House of Correction, which holds pretrial detainees and inmates serving out sentences after conviction. He ordered the county to “take all available steps to house detainees or inmates at other county or state facilities or to make space available at the [Billerica House of Correction],” with the caveat that pretrial detainees may not be housed in the same cell as convicted inmates. Henry also ruled that a total of no more than 1,010 prisoners can be held at the House of Correction, though, and set specific limits on the number of prisoners in each housing unit.

“The closing of the Middlesex jail is placing a significant strain on the town of Billerica and on the regional correction facility,” said state Sen. Kenneth J. Donnelly, the Arlington Democrat who co-chaired Wednesday’s hearing and worked with the Middlesex Sheriff’s Office to file S1477 in January.  “I was happy to file this legislation … This establishment of the commission will be a big step in relieving this strain and finding a permanent solution to this problem.”

Lombardo, meanwhile, said that by finding a new location in Middlesex County for a jail, “the state can hold true to that promise to the Town of Billerica.”