Teaching Trayvon: Divisive acquittal can be a transformative opportunity 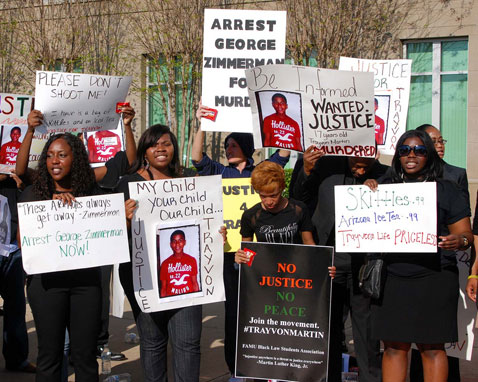 Teaching Trayvon: Divisive acquittal can be a transformative opportunity

While trying to personally grapple with the George Zimmerman acquittal last Saturday evening, I was barraged with text messages expressing polar dispositions: a disbelief in the verdict and the justice system as a whole; and a vivid confirmation that black males are a sub “species” often placed philosophically, legally and institutionally on the margins in this great nation, which has made strides but has far more laps to take before reaching its greatest potential.

Like the Rodney King verdict 20 years before and the killing of Emmett Till almost 60 years ago, the shooting of 17-year-old Trayvon Martin and his killer’s acquittal illuminates the divisive climate of our country, which can be echoed and reinforced in barbershops, corporate suites and in the halls of Congress, where we entrust our elected officials to introduce, to implement and to initiate policy that is fair, balanced and racially neutral. But it would be dangerously naïve of me to believe that there have been sufficient and “adequate” steps uncovered to acknowledge and to address racial disparity and the dissonance and fear that a $29.99 hoodie worn by a black male would elicit in an armed “self-appointed neighborhood watch” civilian.

The ambiguously articulated stand your ground laws that empowered Zimmerman to shoot Martin can be found in more than 20 states in this country, and little has been done to strategically and to systematically remove them. They represent a transformative opportunity for Generations X, Generation Y and millennials to become re-engaged in our local and state infrastructures and to challenge candidates who have similar moral ethos around this law to stand with us and not against us for fear that we will vote them out of office.

Every day 15 black males are murdered in this country, while many just go on with their lives, ignoring the residual impact these acts have on all communities. Martin’s body, which was found six townhouses from where he was staying, was taken to a morgue, drug tested and labeled a John Doe. Not one law enforcement official had the presence of mind to knock on a door to see if this teen had a relation to anyone in the “gated” community? Probably because it was assumed he was a stranger. Conversely, we need to examine why far too many Zimmermans are treated as “colleagues” by law enforcement even when they perpetrate crimes and so many Martins have to navigate our communities with the fluidity of a ballerina.

If we miss this opportunity to utilize social platforms for good, shame on us. We must make a concerted effort to post and host teach-ins, to hold meetings with elected officials to see where they stand on the issues that are important to us, to confront images of violence in the media and reprogram the normalization of these practices. We must rebuke the notion that this is over and use Trayvon Martin’s death as a teachable moment.

Tony Clark is an educator and a 1994 graduate of Cambridge Rindge & Latin School.