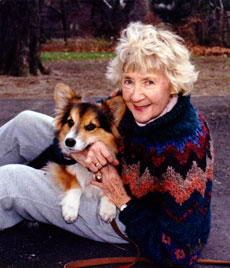 Celia Thaxter Hubbard of Cambridge and Brewster, Mass., a painter, nationally respected gallery owner and leading figure in Boston’s art community in the 1960s, died peacefully Monday, Aug. 12, from pneumonia at Meadow Green Nursing and Rehabilitation Center in Waltham, Mass. She was 92 and had been in poor health for some time.

Miss Hubbard was born in Boston and grew up in Cambridge. She attended Boston Museum School and the New School for Social Research (now New School University) in New York, where she studied under the legendary art director and photographer Alexi Brodovitch.

Artistic from an early age, Miss Hubbard began her career in New York in 1943, working for two advertising agencies and then as assistant art director for Mademoiselle. In 1948, she left New York for France to design sets and costumes for ballet companies including the Grand Ballet du Marquis De Cuevas. While in France, she converted to Catholicism and for a time even considered becoming a Carmelite nun. Her spiritual adviser wisely told her that it was not the will of God for her to sacrifice art, but rather to bring Christ to the world through art.

She continued painting after returning to the Boston area in 1952, and two years later she founded the Botolph Group on Newbury Street, a nonprofit center and gallery for contemporary art. The gallery’s initial aim was to improve the standard of Catholic religious art and objects such as vestments and chalices. Miss Hubbard also worked with architects and designers to bring a contemporary aesthetic to the interiors of churches and religious institutions in the Boston area, some of which were remodeled in response to the Second Vatican Council in 1962.

At the same time, Miss Hubbard helped New York artist Rita DeLisi set up an experimental art school on Massachusetts Avenue in Cambridge to promote visual education. In 1963, it expanded into larger quarters renamed “Project Inc.” at 141 Huron Ave. in a former meat market. In its first year, more than 300 students between the ages of 4 and 74 attended art classes. As Project evolved, it added classes in ceramics and photography, becoming an important center of conceptual art before closing in 1984.

During the 1960s and early 1970s, the Botolph Gallery represented a stable of talented painters, printmakers and sculptors whose work was both spiritually motivated and appropriate for homes and offices. Among the artists were Sister Mary Corita Kent (“Corita”), Norman Laliberte, Tomie dePaola and Robert Cronin. Miss Hubbard also wrote about religious art for scholarly journals and published a line of greeting cards called Botolph Originals, created by many of the gallery’s regulars.

The gallery became known nationwide for its annual exhibition of Corita’s work, and in 1968 she left her convent in Los Angeles and moved permanently to Boston. The previous year, Miss Hubbard and her assistant, Mickey Myers, had produced a memorable event called “An Evening With God” at the Boston Tea Party, a rock music club. The gathering featured Corita, the Rev. Harvey Cox, the Rev. Daniel Berrigan and Judy Collins in an evening of performance art, music and dialogue. The sold-out happening included a belly dancer from the Combat Zone and was mentioned several weeks later in Newsweek’s cover story on American nuns. The Boston Archdiocese’s newspaper, The Boston Pilot, covered the event under the headline, “Hippies, Bongos, Anti-Heroes & X.”

The director of the Boston Theological Institute described the Botolph Group in 1969 as “a rallying place, an identifying symbol, for many Catholics, Protestants, and many of no church, who feel instinctively that a center which has good taste, reflects a zest for life … is speaking to their hearts and minds.”

In the 1970s, Miss Hubbard closed the Botolph Group and sold the gallery to focus on her own creative work. She opened a small antique store in Cambridge and resumed painting and photography. In the 1980s, when she listed her interests as “painting, photography, poetry, metaphysics, antiques and folk arts,” she exhibited her paintings and photographs in New York and Massachusetts. Her Cambridge home in a refurbished barn was profiled in national design magazines.

A deeply spiritual woman who filled notebooks with poems and reflections, Miss Hubbard was fascinated by hearts, doves, owls, rainbows, sunsets, trucks, dogs and small children, all of which made their way into her paintings and photographs. She is survived by eight nieces and nephews and their children. The funeral will be private.