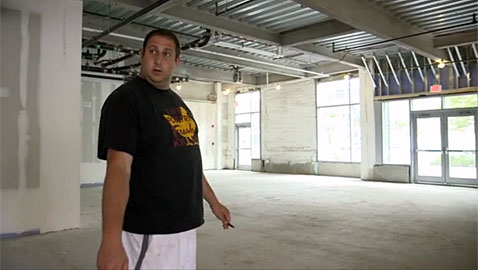 Kendall Square’s transformation from industrial park to neighborhood is lacking a few things, including a pharmacy and grocery store.

Restaurateur Steve “Nookie” Postal says he can help with one of those: a market. With the success of a $50,000 crowdsourced fundraising effort with 20 days remaining on the clock, this fall he’ll open an 11 Broad Canal Way restaurant called Commonwealth and attached grocer with local produce, meats, fish and dairy, George Howell coffee and takeout meals ranging from salads to roast chicken, glazed carrots and whipped potatoes. (Postal has also promised a Steinbones Jewish barbecue for Central Square. The concept had a tryout at Crema Cafe in Harvard Square last year on its way to New York, and Postal later announced a Cambridge location.)

“I’ve been looking for a long time for a restaurant space. It’s taken me over three years,” Postal says in the Kickstarter plea posted Aug. 26. “I wanted it to be in Cambridge, on the red line, to have parking and it had to have outside seating. Problem is, that doesn’t really exist in Cambridge. It actually had to be built.”

The canalside Commonwealth space is actually fairly far along. Postal, former Red Sox chef, cook at Casablanca, Chez Henri, Icarus and Oleana and contestant on Bravo’s “Around the World in 80 Plates,” said the Kickstarter money will help buy such things as kitchen equipment and plates and glasses – finishing touches on a roughly $2 million project.

Along the way, he’s been blogging for Eater.com about his search for space and gear, so interested diners (and shoppers) can see how much he’s sweating the details and, in fact, scrimping to make Commonwealth happen on budget.

“We are almost there, and with your help we can put the final pieces in place,” he tells potential contributors. “This is not just another restaurant. This is an answer to a need the community has been searching for.”

Update on Sept. 6, 2013: Postal said on Eater Friday that after a visit to Masse Hardware, which is shutting down after 125 years in business, he not only picked up an ancient Masse sign but the benediction of third-generation owner David Masse himself: “Something really good will happen to you today.” Lo and behold, Postal was contacted by a total stranger who mailed a $5,000 check to him to add to the Commonwealth fund, helping bring the campaign nearly to its goal with 18 days to go.