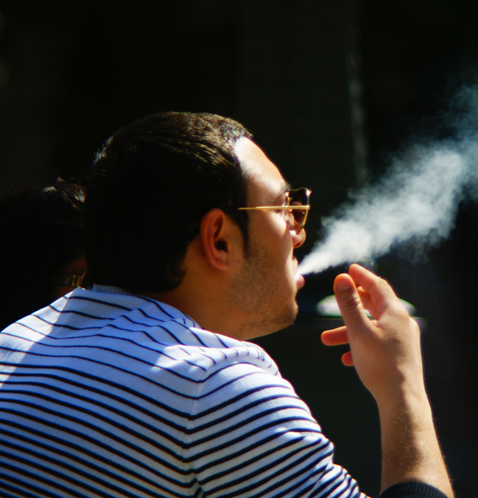 The Cambridge Housing Authority is considering a less restrictive smoking policy that one proposed in May. (Photo: LawPrieR)

Responding to criticism from tenants and their representatives, the Cambridge Housing Authority is eyeing a less sweeping smoking ban than originally proposed for its public housing developments.

Authority commissioners meet Wednesday to consider the scaled-back policy, which would prohibit smoking in apartments and buildings that house more than 2,500 low-income tenants but allow it in designated outdoor areas within developments. Smoking areas would have to be at least 25 feet from windows and doors.The original proposal in May would have banned cigarettes anywhere on CHA property.

The new proposal also removes the threat of a $100 fine for repeated violations and eliminates language in leases encouraging residents to inform managers of neighbors who violate the ban. The no-smoking rule would go into effect in August instead of Jan. 1 as proposed, unless tenants in a development voted for an earlier date.

And the proposed policy made it clear that the ban would not apply to e-cigarettes, the increasingly popular electronic devices that supply users with a mist containing nicotine but do not produce smoke. Many public health experts are leery of the products because of lack of evidence about their effects on health, but they don’t expose neighbors to secondhand smoke, and some studies show that they can help conventional cigarette smokers quit.

If the authority adopts the ban, Cambridge would join more than 250 communities across the country that have prohibited or restricted smoking in public housing, including Boston and others in Massachusetts. A number of private landlords have also banned or plan to restrict smoking in market-rate and subsidized apartment buildings.

The CHA ban is aimed at secondhand smoke that drifts into apartments throughout multi-family buildings, endangering tenants’ health even if they do not smoke. The authority said a survey of its residents showed 79 percent wanted to live in smoke-free buildings.

Still, the original proposal aroused strong criticism, and the tenant representative on the CHA board, Victoria Bergland, voted against it, saying eviction was too drastic a penalty and requiring tenants to inform on their neighbors would promote feuds.

A report from a tenant-management committee that developed the policy to be presented Wednesday said that despite the apparently overwhelming majority of tenants who favor smoke-free buildings, opponents gathered 532 signatures from tenants on a petition opposing the ban. “While this is a large number of signatures, it still constitutes only 14 percent of the adult population of [Cambridge] public housing,” the report said.

In comments from 168 tenants at 10 public meetings and in writing, 60 percent opposed the ban and 40 percent supported it, the report said.

“This is a more even split than we expected,” the report said, implying that committee members anticipated more comments against the policy.

On the pro-ban side, the tenants council at the Burns Apartments supported the policy and a letter from 58 tenants at JFK Apartments also urged adoption. Some residents said ambient smoke caused health problems. “My 4-year-old has asthma and she gets attacks which are triggered by smoking neighbors,” one said. Several public health experts wrote letters in support.

In developing the new proposal, the committee rejected suggestions that the authority drop the threat of eviction as well as the fine. That would prevent enforcement, the report said.

Tenants also suggested that instead of banning smoking everywhere, the authority designate buildings or floors where tenants could smoke. The committee said it was impractical to choose buildings for smokers, and that letting people smoke on certain floors would not prevent secondhand smoke.

Responding to pleas from tenants who said they are addicted and can’t stop smoking – “Heroin is easier to quit than cigarettes,” one said – the committee said the Cambridge Health Alliance would hold six meetings with tenants to inform them of resources for quitting. The panel also recommended that the Authority contract with smoking cessation counselors to provide one-on-one help in person or by phone.

The report also pointed out that tenants can still smoke cigarettes in permitted areas outside, and can smoke e-cigarettes anywhere.