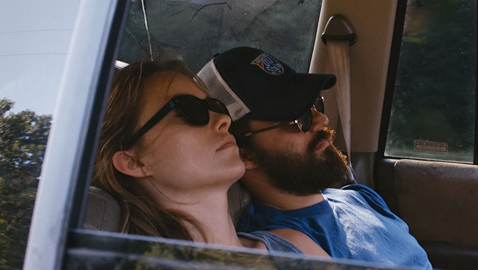 What happens when your best friend and co-worker is a member of the opposite sex and you’re hopelessly attracted to them but can’t pursue anything because you’re in a long-term relationship heading toward matrimony? That’s the situation Joe Swanberg’s neo-slacker essay plumbs, and it gets even more complicated when Kate (Olivia Wilde) and Luke (Jake Johnson) bring their significant others along for a couples getaway in the woods. In the middle of the night, after some silly drinking games, the two, who work at a Chicago micro-brewery, sneak down to the beach and forge a raging bonfire. The sexual tension’s aflame too, a veritable tinderbox of unrequited passion, needy and raw and open to that game-changing spark. You might feel sorry for their SOs, but they’re not so innocent themselves; earlier in the day, Jill (Anna Kendrick) and Chris (Ron Livingston) went out for a hike, drank some wine and after an awkward conversation about love, life and fulfillment, also rolled perilously close to the precipice of crossing over. 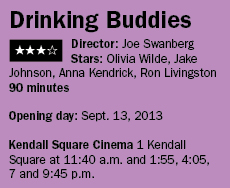 If there’s one thing painfully obvious (like, “My Best Friend’s Wedding” obvious), it’s that Luke and Kate are meant to be together, but thankfully Swanberg – one of the early adaptors of mumblecore filmmaking (the lo-fi indie film movement in which production values, most notably sound, play second fiddle to the visceral and ideological elements) along with the Duplass brothers (“Puffy Chair”) and Andrew Bujalski (“Funny Ha Ha”) – is after something a bit more nuanced and un-Hollywood. For inexplicable reasons Chris leaves Kate, which further enables Kate and Luke’s hop-infused brewmance. The pair, along with other vat rats from work, spend many a late night lighting up the dingy side of Chicago, while Jill, conveniently a teacher, sits at home toiling away on art projects for her special-needs students.

The crescendo of consequence seems ripe for revelation, but not all batches of brew are crisp and golden, and this one goes sour when Kate begins to find her sexual liberation (by bedding other men) and Luke, normally the hip jokester, doesn’t quite know how to react. It’s a tasty conflict to chomp into, but then again we’re tagging along with largely unanchored people who, with the exception of needing the structure of a (or any) nine-to-five and a best friend or convenient SO to make their daily meanderings meaningful, don’t seem to have any discernible dreams for the future – not even a bungee jump or an ocean crossing to see the Great Wall of China. In that, Swanberg’s character exploration begins to sag under the weight of its subjects’ pouty malaise.

Don’t get me wrong. Swanberg’s a competent director and committed to his game. He’s cranked out more than a dozen flicks since 2005 and appears prolifically in other mumblecore and mumblehorror directors’ films – most recently as an uptight yuppie in “You’re Next.” If you look back at Swanberg’s career, many of his early slacker-themed films such as “Hannah Takes the Stairs” (which stared Mark Duplass, Bujalski and Greta Gerwig) center around disenfranchised young adults seeking self-gratification; “Drinking Buddies,” beyond some foamy frivolity, takes a slightly older generation and goes down a path beyond the “me” and into the realm of commitment, responsibility and family.

The secret yeast that makes “Buddies” ferment and keeps it sharp is Wilde. She’s done her share of being a sultry side dish (”Tron: Legacy”), but here she’s able to showcase a verve and range few might have thought possible. Johnson too, best known from television’s “New Girl,” with his darting eyes and sly smile is able to connote character effortlessly. The normally redoubtable Kendrick (”Up in the Air”) and curmudgeonly Livingstone (”Office Space”) have less to work with. Their characters feel like props, lazily constructed puppets imbued with domineering asexual unattractiveness to underscore the inevitability of Luke and Kate. At times it feels like a cheap trick, but in the end, Swanberg has the last laugh as the film ties up on a surprising and contemplative high note.

Just perhaps the maestro of mumblecore is ready for the mainstream?