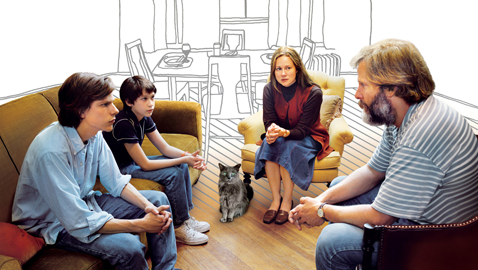 “Frances Ha,” Noah Baumbach’s intriguing blend of old-school Woody Allen (think “Annie Hall”) and mumblecore (the indie lo-fi filmmaking movement started by Andrew Bujalski and the Duplass brothers) is an improvisational romp through New York City as a jilted young woman (mumblecore staple Greta Gerwig), an aspiring ballerina, finds herself homeless and unlikely to get a coveted spot in a dance troupe. The ride is uneven but ultimately rewards in the way it folds continually back on itself. Of course, how you see the movie depends on how much you value Gerwig. Shot in lush black and white, it plays Friday night at The Brattle Theatre, 40 Brattle St., Harvard Square.

“The Squid and the Whale”: Baumbach’s raw tale of family dysfunction is subtle in its undercurrents. It is not an overt tale of a family in crisis, but something more nuanced and sincere in its autobiographical coming-of-age POV (Jesse Eisenberg as the troubled son) and surprising as the marriage of a New York academic (Jeff Daniels) and his wife (Laura Linney), who at first seem to be the perfect nuclear unit, unravels in small nasty peels.