So you’re a ladykiller and you’ve got abs and a workout routine that would challenge The Situation (not to mention a bit of his Jersey gym rat accent), so why live the life of a chronic masturbator when you can have any babe in the house? A good question, and pretty much the rub of Joseph Gordon-Levitt’s rom-com, where he not only tackles the role of the buff Jersey boy of the title but also makes his feature debut as writer and director. 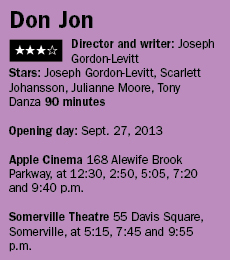 Sex addict, porn addict? “Don Jon” is not so concerned with that as with Jon’s journey from meandering man-boy into manhood. That transition gets a strong directional pull one night while, out prowling the clubs, Jon lays eyes on the comely Barbara (Scarlett Johansson, giving her best and most sex bomb performance to date). She’s an arguable 11 (that 10 scale again!) who’s interested in Jon, but won’t let him bed her without a proper and long courtship, and she knows how to keep him on the hook without letting him in for a nightcap. Barbara’s also a life planner and isn’t so thrilled by Jon’s dead-end job in an electronics store or his lack of education, so to even get in the game Jon’s got to sign up for night classes and take Barbara to meet his parents, which prove to be loaded and fateful propositions.

Much in the film carries the tang of stereotype and cliché (think “Jersey Shore”), but as it washes over you and takes hold, you realize there’s much more going on than a couple of greasers looking for hit-and-runs. It’s about letting go, finding yourself and connecting; a sly subversive charm that Gordon-Levitt has (through skill or beginner’s luck) infused into the script. Barbara’s gum-smacking challenges and demands put Jon on edge and as director, writer and actor, Gordon-Levitt isn’t afraid to deprecate himself or let the other players take center. Jon’s outshone by nearly every other character in the film. Barbara’s a strong cup of tea with her blunt bimbo-esque garble and clingy sweater dresses. Then there’s an overly tanned and toned Tony Danza and Glenne Headly serving up devilish fun (and archetypal puns) as Jon’s working-class parents, while Julianne Moore adds a soft, human touch as a troubled older woman in one of Jon’s night classes. Their relationship moves in surprising and affecting ways that educes the reluctant heart in the brash braggadocio.

And even as Gordon-Levitt builds the film with emotional layers that take root with earnestness, there’s a jab of good humor in nearly every scene, even if it’s a quick cutaway to Jon’s mounting mass of wadded-up tissue balls in the wired mesh trash can next to the laptop. The comedy also gets a boost from Jeremy Luke and Rob Brown as Jon’s posse and Greek chorus, and Brie Larson adds tartness as Jon’s adolescent sister, a constant reminder of teen angst and boredom as she sits at the dinner table, tacit and unengaged even during the bursts of raised-voice hysteria common at Jon’s parents’ house.

In its sweet quirkiness “Don Jon” plays out like a Woody Allen comedy from the other side of the tracks, with sharp, sophomoric wit stepping in for highbrow satire. It’s an impressive outing for Gordon-Levitt as a nascent filmmaker, even if the film doesn’t have a satisfactory “happy ending.”