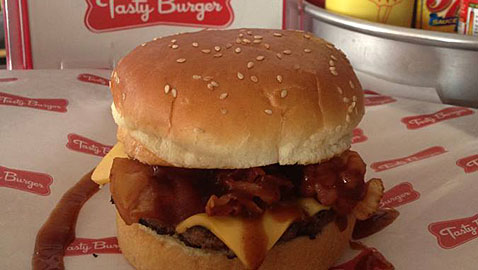 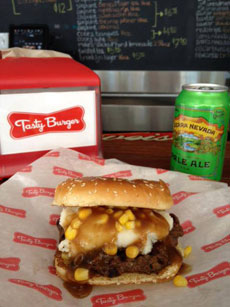 Tasty Burger’s owners say they prefer to serve the chains fare – including specialty burgers such as a shepherd’s pie burger – with an alcohol option.

Tasty Burger is not coming to the bakery site off Central Square.

With the License Commission set against late-night beer and wine in a residential area and the owners of Tasty Burger convinced it was needed, the applicants didn’t change their request to move to 74 Prospect St. and replace the Lyndell’s bakery, and commissioners voted 2-0 on Thursday to reject the unrevised plan.

“They said they felt the site itself is appropriate for a restaurant, but not one like the Tasty Burger proposal,” neighbors were told in an e-mail from Nancy Ryan, a member of the steering committee of the Essex Street Neighbors group.

Tasty Burger, which has a two-story Harvard Square location open until 4 a.m. in addition to sites in South Boston and the Fenway, hoped to replace Lyndell’s, keeping its seating for 49 inside and 20 on a seasonal patio, but be open until 1 a.m. Sunday through Wednesday and until 2 a.m. on the weekends. Its representatives at a Sept. 10 commission hearing, Davis Dubois and Christopher Gotreau, promised to end outside service at 10 p.m.

Neighbors were concerned about trash, rodents, noise and the alcohol license, spurring commission chairman Michael Gardner to ask whether Dubois and Gotreau felt the Tasty Burger concept would work on Prospect Street without it.

“I feel like it can’t in that location. And it’s not that the percentage of alcohol is so high,” said Dubois, a Cambridge native. “It narrows the demographic.”

Before Lyndell’s, the site was the original location of the small Carberry’s bakery chain – and is still owned by Matt Carberry – and Gardner suggested in September that the “jarring” change in use to restaurant from bakery might be a factor in his Thursday decision.

Pangs of hunger, or regret

Even neighbors who felt the hours and alcohol weren’t appropriate for the area, or simply feared the cheap, savory food would be an irresistible “last call” for patrons already drunk from a Central Square nightclub, said they enjoyed going to other Tasty Burger locations.

“I actually like Tasty Burger. I mean, we go to the Tasty Burger in Harvard Square quite a bit with my kids. Actually it’s a pretty good place,” resident John Capello said.

City councillor Minka vanBeuzekom, who lives nearby, agreed. “We want to encourage a place like this to come here, but the 2 a.m. license isn’t really in keeping with the residential character,” she said.

The commission is likely to face another bid for 74 Prospect St. soon; although Tasty Burger isn’t moving in, Lyndell’s – based in Ball Square, Somerville – lost its lease in the run-up to the decision.

One member of the Essex Street group was sorry to hear Tasty Burger wouldn’t be coming.

“If I’d realized, I might have voiced support rather than apathy. I hope to see a locally owned restaurant with a similar model: affordable food, open late … and, yes, beer,” said the resident, quoted by Ryan in explaining the commission’s decision.