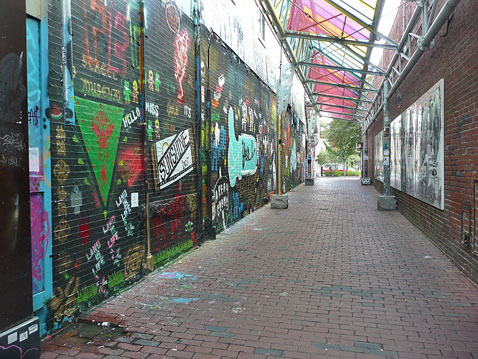 Richard B. “Rico” Modica Way in Central Square has a mix of artistic graffiti, vandalism, broken brick and trash – like Central Square as a whole. (Photo: Lorianne DiSabato)

The gist of Monday’s talk about Central Square’s persistent grubbiness: It’s better than it used to be, but that doesn’t mean much. And the city is looking to the square’s businesses to make the difference.

The official response to an order filed last month by city councillor Minka vanBeuzekom was a long list of things already being done by the city in Central – 32 bullet-point activities in eight categories gathered by Acting Public Works Commissioner Owen O’Riordan that included cleaning by mechanical street and sidewalk sweepers or hand crews seven days a week, twice-daily emptying of the Big Belly solar-powered trash compactors, steam cleaning of some alleys once a month and the creation of hotline phone numbers for graffiti, broken sidewalks and rat problems.

“I’m not sure [these things] happen the way they’re planned to happen. But assuming that they do happen, it’s not enough,” said vanBeuzekom, a resident of the square who explained that she’d walked through the square just that afternoon taking pictures of persistent graffiti, gum on sidewalks and trash can interiors in need of cleaning. “I think we need to evaluate whether we need to put more resources on or whether there needs to be a follow-up crew to check that things have really been cleaned up the way the administration wants it to be cleaned up. There’s a disconnect somehow between what the plan is and what actually happens.”

Despite comments from two other councillors coming between vanBeuzekom’s remarks and his own, City Manager Richard C. Rossi replied to her directly.

“The city puts a very high priority on Central Square and applies a great deal of resources, and I don’t know that I’d agree there’s a disconnect. I would take a bit of exception to that,” Rossi said.

In fact, he reported recently walking through the square himself and being struck by how good it looked.

There was actually general agreement the square looked better these days – but that there were some intractable problems spoiling the effect. For instance, the problem of dropped cigarette butts was called likely to drag on until more sidewalks were switched to wire-cut bricks, which fit together smoothly and form a solid flat surface, and the traditional bricks-and-mortar style brick was left behind with its tendency to trap cigarettes and other litter in its grooves. The use of wire-cut bricks – such as in front of the Central Kitchen restaurant – makes it easy for shopkeepers to sweep, as property owners are responsible for keeping their portion of the sidewalk clear.

Councillor Ken Reeves agreed. “It’s better today, but Central Square will never be clean until we address the gum issue,” he said.

The councillors gave an informal order to Rossi: A machine that removed gum from sidewalks was “one for the list” of purchases to make.

Gum-removal machine aside, there is a limit to how much the city can do, Rossi said.

“As I think about resources, I can’t just think about Central Square,” he said, listing other parts of the city needing equal attention. “The effort and attention paid to it is pretty incredible … it’s always going to be a challenge, but it’s only get better if more and more people take an interest. That’s something we’re going to be working on.”

“We absolutely have to get more engagement and commitment from the business community,” he said.

One solution is the formation of a business improvement district, in which property owners get together to pay for services – such as cleaning – beyond what city government provides. Reeves said he hoped “the magic of the Rossi administration” would convince Central Square businesses to form one, as the developer Forest City had formed one among the businesses of its University Park just south of Central Square.

Nighttime businesses were already being urged this month by the License Commission toward forming a joint fund to hire more police to keep order among the crowds and lines waiting outside the area’s late-night clubs and bars.

An informal business group may be in the works. Until it closed last spring to make way for a grocery store and food court, the Clear Conscience Cafe was the regular meeting place for an ad hoc Central Square improvement committee brought together by cafe owner Daniel Goldstein. Those meetings, which gather business owners and city and police officials for two hours every other week, have just been restarted at Toscanini’s ice cream by landlord Patrick Barrett, according to Deputy City Manager Lisa C. Peterson.

Councillor Leland Cheung suspected there was still a role for elected officials to play, and he lobbied successfully for his fellow councillors to send the issue of Central Square improvements to his Neighborhood & Long Term Planning Committee – because vanBeuzekom’s initial assessment of the situation had some validity.

“There does seem to be a disconnect between the expectations people have versus what they see in reality around them,” Cheung said.