With rat problem spreading to new areas, councillors ask that city steps up the fight 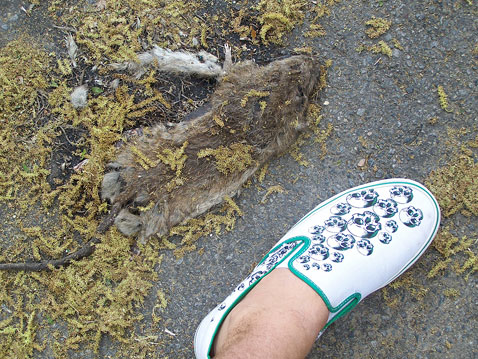 With rat problem spreading to new areas, councillors ask that city steps up the fight

The size of a dead Cambridge rat is shown compared with an adult man’s foot. (Photo: Jonathan Pape)

As the city’s rat problem persists and spreads to new neighborhoods, officials are wondering what became of a year-old request to hire outside exterminators to supplement city staff and are sounding an increasingly urgent tone on finding even more solutions.

“I would ask that the city manager take a fresh look at this issue and find a fresh approach to it. I know the folks in Inspectional Services and know they’ve done everything they can,” city councillor David Maher said Monday. “The frustration level in the community is growing, and we don’t have good answers for folks. And I think as a community we can do better.”

During a council meeting, Maher and councillor Ken Reeves testified to the spread of rats to more parts of the city, but Reeves was particularly struck by the problems in Riverside, where dual construction projects have disturbed rats’ homes and sent them looking for new sources of food and shelter.

“We have unleashed the fury”

While work on the Martin Luther King Jr. School at 100 Putnam Ave. has just begun, residents are suffering from two years of roadwork tearing up Western Avenue – the duration of which is a whole other problem giving neighbors “extra strain,” Reeves said.

“We have some real ownership, especially around this rat issue … the amount of rats you’ve disturbed is disturbing! This is a problem that we wrought, and we need to have a plan. We can’t just say ‘You and your neighbors have to figure this out,’ because we opened the floodgates, and we know it,” Reeves said. “In Riverside we have unleashed the fury.”

Maher agreed that for many years “the answer has been that this is an individual homeowner’s issue and problem and that the city can help direct people. But I think the issue is getting to where we need to step up and probably put some money behind this issue.” Reeves suggested that city workers should “go door to door and find out what treatment and help we can offer.”

With the city in an enduring development spike that will be displacing rats for years to come, what is alarming residents is not just the presence of the rodents but their boldness. In reports last year and in 2009, rats have been seen doing their work as groups in daylight rather than skulking around in darkness and scurrying off when people discover them. It’s a resurgence of horrors residents were complaining of as far back as 2005, when a council that included longtime incumbents such as Reeves hoped to find a fast solution.

While part of Maher’s policy order urges City Manager Richard C. Rossi to “develop a coordinated effort to address this issue and provide help for homeowners,” another section simply asks for an update on progress in the war on the rats.

During the meeting, he said that meant answers on the delay in bring in contractors that would be able to go onto private property – with permission – to bait and exterminate invading rats.

That plan was proposed unanimously by city councillors a little more than a year ago, when councillor Tim Toomey was already describing a “rampant” rat problem. The Oct. 1, 2012, policy order proposing that city staff be supplemented by contractors was answered sixth months later, on April 22, with then city manager Robert W. Healy proposing back to the council “a more aggressive practice in high-activity areas, as a pilot program.”

His proposal, requested by the council, was placed on file.

Maher wondered Monday what was behind the delay in hiring, considering the availability of qualified exterminators, but an official from the city’s Inspectional Services Department said Tuesday that the plan and an accompanying ordinance was still being put together. A call Tuesday to John Nardone, assistant commissioner for operations in the Public Works Department, wasn’t returned.

City workers are being trained in rodent control, and work on a pilot program allowing them to go on private property is ongoing, Rossi told councillor Craig Kelley’s Public Safety Committee last month.