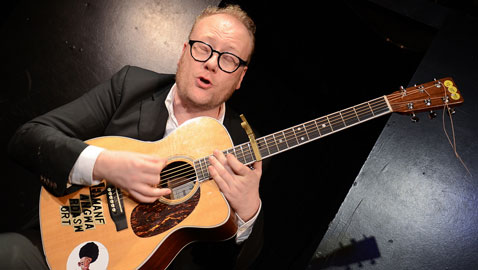 Of course “The Slutcracker” is back at the Somerville Theatre, starting Saturday and running weekends through Dec. 31 (and adding Thursday performances Dec. 12 and 19 and even Tuesday performances for Christmas Eve and New Year’s Eve). This year brings something new: An opening set from Mike Doughty, the singer-songwriter and onetime lead for the band Soul Coughing.

Why Doughty? As the event organizers explain it:

Back when we began performing “The Slutcracker”’ in 2008, singer-songwriter and all-around groovy guy Mike Doughty … gave his blessing when we asked to use his song “Girl in the Blue Dress” as our curtain-call music.

Of course Doughty would be cool about it – Soul Coughing was among the weirdest and coolest bands of the 1990s, and “The Slutcracker” fits those categories for Somerville and Cambridge as a sex-positive retelling of the holiday “Nutcracker” story by burlesque artists.

It’s a shame Soul Coughing broke up and even a greater shame it was necessary because, well, those guys hate each other. But “The Slutcracker” has a message of love, and Doughty is a witty and embracing artist who – after years of refusal – has even recently begun playing his own version of Soul Coughing songs in addition to his own deep repertoire.

His performance is part of the Sunday ticket price – just as the repeat opening-set performance of local steamcrunk troupe favorites Walter Sickert & The Army of Broken Toys is Dec. 24, a combination organizers said would make “for another sure-to-be-memorable Slutmas Eve.”

A link to “Slutcracker” tickets is here.