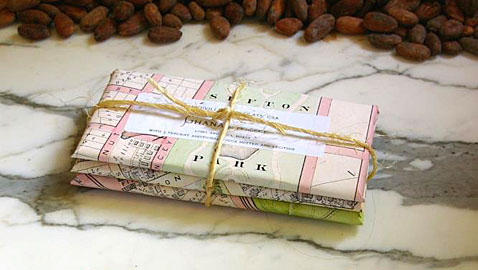 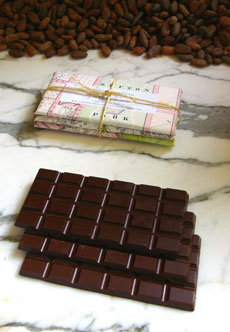 Classically, belong to a CSA and you’ll all too often find yourself with deliveries of way more kale or cucumbers than you can reasonably eat. Eric Parkes is confident in saying – no matter how much you might wish it were otherwise – that will not happen with his Somerville Chocolate CSA.

Going into its second year, this sweeter-than-usual example of community-supported agriculture costs about $160 and will give members about three bars every six to 10 weeks, each weighing about 2.5 ounces. Thanks to varying factors of the harvest and cook, each bar will be subtly different.

“Generally each harvest features beans from a different origin or a blend of multiple origins. Every now and then the CSA will break things up by offering three completely different bars that experiment with inclusions and additives,” says Parkes, an architect inspired to make his own chocolate by a 2010 trip to Costa Rica:

The broader goal of the CSA is to use the multiple-bar harvests as a means of involving people in the experimental nature of chocolate making and the role that the various steps in the process play in developing the final flavor, look and consistency of chocolate. Thus most (but not all) of the harvests feature multiple chocolate bars that highlight a particular variable. A few examples would be the roast profile/process, sugar content, cocoa butter content, refinement/conch time, or type of sweetener.

Chocolate is picked up by share owners at either Parkes’ kitchen – licensed as Somerville Chocolate, to sell by the bar and even wholesale – or at the True Grounds Coffee House, 717 Broadway, Ball Square, Somerville. For another $45, the chocolate can be mailed.

Want in? Go to the website or send email to Parkes.