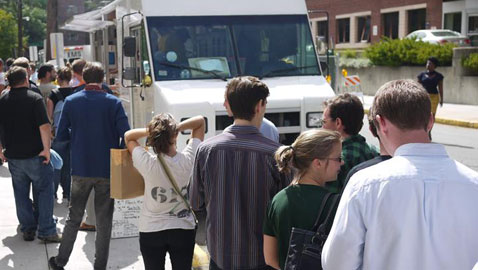 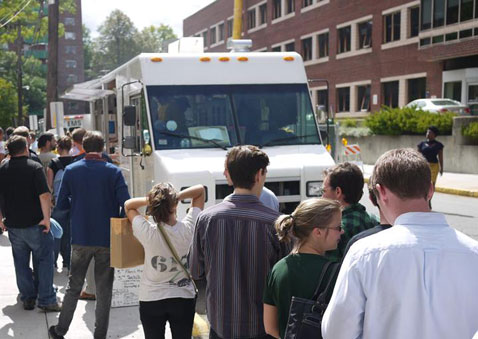 The Clover food chain says it plans to roll out a lunch truck every other week until May starting with Monday’s launch in Alewife. (Photo: Clover Food Lab)

“There is no area that’s had more requests for a Clover truck. We’ve been working on this for years and we couldn’t be happier to make the announcement,” said Lucia Jazayeri, the chain’s communications director. The announcement came as soon the company, founded by MIT grad Ayr Muir, got licensing for the spot cleared up.

The truck is being set up weekdays from 11 a.m. to 2 p.m. in the Vecna health care tech company parking lot, 36 Cambridge Park Drive by the Alewife red line T stop. The menu for opening day is simple: just the $4.67 chickpea fritter sandwiches, $3 french fries with rosemary and $3 drinks and pour-over coffee.

The Alewife area is booming, with thousands of residential units under development and companies seeing as a backup to the crowded and increasingly expensive Kendall Square innovation district. Clover said its Alewife truck would be its first dedicated to serving an industrial park “outside the city.”

With the (slightly) warmer weather Clover has been putting its food trucks back into operation, starting in late February with a lunch truck at 20 Carleton St., Kendall Square, to serve the Massachusetts Institute of Technology community. With Monday’s launch, Clover plans to roll out a truck every two weeks until May, Jazayeri said.

The truck and its menu – and trivia and surprises – can be followed on Twitter at @cloverALE.