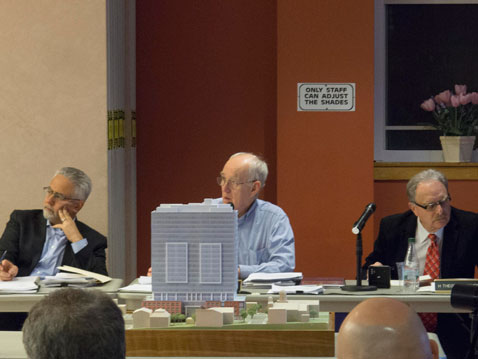 Planning Board members at a four-hour meeting Tuesday on a development proposal for the former Edward J. Sullivan Courthouse in East Cambridge. (Photo: John Hawkinson)

The redevelopers of the former Edward J. Sullivan Courthouse say they have had discussions with the Galleria Mall for the parking the project requires, an alternative to looking for space at the city-owned First Street Garage after that plan drew widespread community opposition resulting in pressure on the City Council and city manager.

The Planning Board took no action on the developer’s proposal at its four-hour Tuesday meeting, and had no discussion on its merits. Board chairman Hugh Russell said the lateness of the hour and quantity of public comment precluded the board from discussing the issues.

Furthermore, a crucial legal opinion on zoning requested by the board  at its March 4 meeting still hadn’t arrived from City Solicitor Nancy Glowa and her staff. It is expected this week, and the board is expected to take up the courthouse again in June. The developer had asked the board to make no “final decision” at Tuesday’s hearing.

Leggat McCall’s plans for the 22-story, three-basement former courthouse call for 460,000 square feet of office space, some retail and 24 to 48 units of housing. Only some 90 parking spaces fit onsite, demanding spaces elsewhere.

But the First Street garage leasing “process is not moving forward at the City Council,” attorney James Rafferty told the board as representative for Leggat-McCall Properties, the developer. He described the city’s property disposition process as “very time-consuming,” saying, “it has not, frankly, begun in earnest yet. The city has not initiated the appraisal process and it’s for that reason that an alternative is being explored.”

Leggat-McCall is in discussions to lease 420 spaces from the Galleria Mall, Rafferty said, and anticipates amending its application to request a special permit for offsite parking, needed because the mall is more than 300 feet from the courthouse site. Zoning requires that “safe and convenient access” be provided between the development and its offsite parking.

This is the second formal meeting of the board on the 40 Thorndike St. courthouse project. It was first heard Jan. 7 before a board of six members, which scheduled a continuation to March 7, but they were unable to achieve quorum then. Assistant City Manager for Community Development Brian Murphy announced at that meeting that he would ask the city solicitor for an opinion on whether the courthouse qualified as a “pre-existing nonconforming structure.” The City Council adopted a resolution March 24 asking for the same opinion.

That language is critical to the development plans. If the building is a pre-existing nonconforming use, the board can grant a special permit allowing it to be altered. If it is not, the building is in violation of zoning and Leggat-McCall would not be able to redevelop the building. In its current condition, the 1970s-era building has been deemed not usable, in large part because it requires an estimated as $34 million of asbestos mitigation.

Glowa, the city solicitor, has been out of the office since Friday and has not responded to queries about the timing of her opinion. The City Manager’s Office was also unable to explain the delay or why the opinion, which was requested 55 calendar days prior, was unavailable. Leggat-McCall’s request that the board make no final decision was sent by letter April 23 and could have influenced the solicitor’s timing.

The city opinion is expected in time for the May 5 council meeting, according to Jason Alves, aide to city councillor Timothy Toomey.

No discussion of special permit criteria

The board ran out of time to discuss the case; it heard Leggat-McCall present for 90 minutes, asked some brief questions and took another 90 minutes of public comment. Russell announced that he was “tired and overwhelmed” by the meeting, and the board adjourned without further discussion.

Vice-chairman H. Theodore Cohen said afterward that the board had hoped to discuss the case, and that “I think we all would have been happy if there had been an hour of testimony and an hour or so to talk about it.”

While the board had declared it would rely on the city’s legal department to address whether the building is a pre-existing nonconforming use, it still faces many zoning questions. The special permit criteria include:

Urban design: Whether the project is “responsive to the existing or anticipated pattern of development” and will “reinforce and enhance the complex urban aspects of Cambridge as it has developed historically” or “impair the integrity of the district.”

Non-conforming structure: If the redevelopment would be “substantially more detrimental to the neighborhood than the existing nonconforming” use.

Conversion to residential use: Evaluating the “potential negative impacts of the new activity on abutters as a result of … location, orientation and use.”

The board did not discuss these criteria, but did summarize them to guide public testimony.

A presentation by Rafferty and a team of architects and consultants showed significant changes only in landscaping, trying to make a green area along Spring Street more accessible to the public by lowering it to street level. But one landscape architect in the audience suggested the change made it look more “corporate.”

Leggat-McCall also had its consultants present studies on wind, lighting and glare and provided a discussion of issues related to the Massachusetts Environmental Protection Act and its decision to seek an abbreviated MEPA process through a waiver – a bid city councillor Dennis Carlone later said he would ask fellow councillors to oppose.

Cohen asked whether the architectural changes to the building would change the wind activity. Ray Sinclair, a wind consultant from RWDI, said that some of the changes “do increase some wind activity,” which the team hopes to mitigate with trees and ground-level vegetation.

After the meeting he added that actual measurements of wind were not standard in his industry, and he could not recall a case where his firm had taken them. Reliable measurements require deploying many pieces of equipment for a long period to capture daily and seasonal variation, and they are at risk of vandalism, he said. 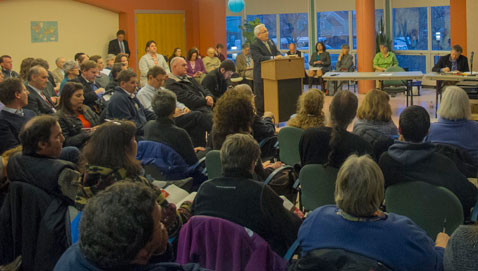 About 100 members of the public attended the meeting, and about 30 spoke at public comment. Sentiment was near uniform in opposition to the project, with the exception of two business association members, a resident and one non-resident who works in the area.

Concerns of noise, traffic and light pollution were repeatedly raised, and many expressed frustration at the process and the state’s decision to award the property to Leggat-McCall, with MIT professor Seth Teller calling the departure of the building’s courts and jail a “once-in-forever” chance to fix a problem – a massive structure that didn’t fit in a residential neighborhood that opposed it from the start.In a shift, the board let neighborhood associations pool their time and make visual presentations rather than restricting them to three minutes per person. Michael Hawley, representing the newly-formed Neighborhood Association of East Cambridge, offered a slick multimedia presentation that included a vertical video of block-after-block of stalled cars, visually making the case for East Cambridge traffic problems that residents fear would worsen with the tower’s new use. Barbara Broussard indicated the East Cambridge Planning Team would wait for a revised proposal from the developer would offer its comments by letter to the board.

In Durkin, the local ordinance allowed government uses of the property as-of-right, Bobrowski said, and a subsequent change to that ordinance made the Falmouth post office a lawful, pre-existing nonconforming use – but the courthouse could never have built as-of-right.

Bobrowski said he looked forward to the city solicitor’s opinion so he could respond to it.

The planning board is expected to resume this hearing June 3 or June 17.

An earlier version of this article paraphrased Leggat-McCall’s attorney, James Rafferty, as saying the company had “arrangement” to lease parking spaces at the Galleria Mall. Rafferty has clarified Legatt-McCall has merely had “discussions” about leasing spaces, but does not have an “arrangement.”