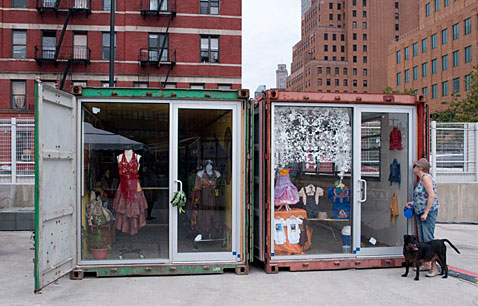 A marketplace made of cheap, repurposed shipping containers could be on the way to Kendall Square, enlivening the Cambridge Redevelopment Authority’s tiny so-called Parcel 6 until a bigger, more permanent plan comes along.

It would take a small lot in “sad shape” and serving as a holding area for construction equipment and, for three to five years, turn it into a lively, ever-changing spot for sales of anything from Etsy-style crafts to food by small-business people, said Chris Colley, a Harvard University Graduate School of Design student and intern at the authority. A test of the concept pilot could be implemented as soon as August and run through October. (Colley’s written report on the concept suggested a marketplace could be on the site for five to seven years.) 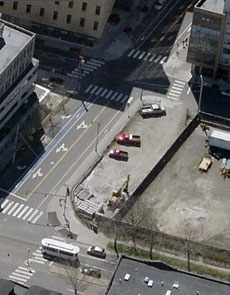 Kendall Square would hardly be the first with a container marketplace. Colley explained last week that they’ve popped up to revive formerly vacant industrial sites from Brooklyn and Toronto to Christchurch, New Zealand, and Melbourne, Australia.

“It’s an idea that’s happening in a lot of places. It’s too bad that they already sort of beat us to it,” Colley said at the authority’s Wednesday meeting. “There’s a million shipping containers lying around. You can repurpose them, throw the containers on the site, populate them with a range of vendors and you do a certain level of landscaping to create an environment where people can relax and hang out.”

There are fancier versions than are envisioned by Colley and the authority. To create Churn out of a shipping container took $65,000, and there are containers with hardwood floors and glass fronts, Colley said, but the Kendall Square model would probably not reward such expenditures – the idea at this point is for shipping containers to arrive seasonally and be customized minimally with plants and paint for vendors who would use them once or twice a week, making room for vendors replacing them on a schedule the next day.

Colley’s mockups showed three containers on the 5,900-square-foot site at Binney and Third streets, by the John A. Volpe National Transportation Systems Center that planners expect to relocate eventually to smaller offices, leaving roughly 7.5 acres in the heart of Kendall Square for development and a park. But Parcel 6 could hold more than three containers.

Shipping containers rent for about $175 per month and can be delivered for about $150, Colley said, and the authority could accommodate or attract different kinds of vendors by bringing water or electricity to the site. Tom Evans, the agency’s executive redevelopment officer, said the lot is one of Kendall Square’s rare above-ground electricity access points, although “to bring in water would be harder.”

Evans stressed that the authority’s losses in preparing the site and running it would likely hit five digits, and Colley agreed that the marketplace shouldn’t be looked at as a for-profit or even break-even venture.

“The goal financially would be to cover our operating expenses,” Colley said. “Because of the spirit of the thing, we’re not going to be able to recoup our initial investment, but I think it’s a project that fits in with the overall mission of the authority” to enliven Kendall Square – more so than the ongoing rental to Flett Construction, which brings in $500 per month.

There could also be offseason uses for the 147 Binney St. site making enough money to compensate for the authority’s outlay. Board members and residents in attendance suggested it would be worthwhile to explore using Parcel 6 as resident and visitor parking for a Kendall Square increasingly short of spaces, or as snow storage – a place for the city to pile up snow that would otherwise be clogging streets.

Board members were in favor of moving ahead, starting with finding a savvy, experienced manager to recruit the right vendors.

“Someone who’s really attuned to making this different and fun,” Born recommended. “It’s got to have some trendy stuff.”

Residents also seemed to like the plan, with James Williamson suggesting that neighborhoods in the city be given space to fill and Barbara Broussard, president of the East Cambridge Planning Team, seeing a potential spot for her to sell her own stuffed animals.

The authority plans a June 10 meeting about how it would take on the empty Foundry building as a “demonstration project” – usually a blighted area taken by eminent domain to fix, but in this case a city-owned building at 101 Rogers St. that would be simpler for the redevelopment agency to renovate than the city.

In addition, the authority approved a two-year contract for up to $60,000 with HR&A Advisors, consultants with offices in New York, Washington, D.C., and Los Angeles whom Evans said could give great insight on the use of buildings such as the Foundry.

A CRA team talked to three firms that were finalists for the contract, Evans said, and “going into the interviews, all three were kind of even. Coming out of the interviews, these guys at HR&A were head and shoulders above the other two firms in how they conducted themselves and the depth of their experience.”

“They bring to us ideas from outside the commonwealth that I think will be really helpful as we need to pick through complex issues such as the Foundry,” Evans said, noting that the firm has worked on Foundry-like buildings – former industrial sites repurposed in creative ways – in Virginia and New Jersey. “So as we start trying to to craft unusual models in this demonstration project, it seems like that kind of national expertise can be really helpful.”

HR&A also has local experience – as close and recent as its work on MIT’s East Campus Gateway project and on restructuring the financially ailing Massachusetts Bay Transportation Authority.

The Foundry building became city-owned in January 2012 in a real estate deal that spelled out that municipal or community uses were preferred for its 53,800 square feet, and that at least 10,000 square feet must be filled with community, educational, cultural or institutional uses. While talk about uses goes on, the City Council has approved $6 million in renovations needed no matter what the building winds up holding. Ultimate costs have been estimated as high as $30 million.

Talk about the Foundry has kept us “quite busy,” including in several meetings about it with city staff, Evans said. The June 10 meeting would bring the public into an updated conversation about governance of the project and its legal logistics.

The meeting would likely be held at the Multicultural Arts Center, 41 Second St., East Cambridge.

Update on June 14, 2014: The community meeting about the Foundry is set for 6 to 8 p.m. June 24 at the Multicultural Arts Center, 41 Second St., East Cambridge. RSVPs are requested here.