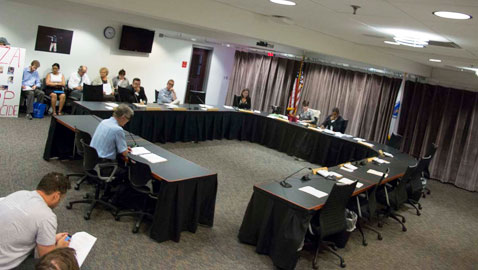 City councillor Dennis Carlone testifies at a Wednesday meeting of the council’s Ordinance Committee hearing his own petition to claim certain special-permit powers away from the Planning Board. (Photo: John Hawkinson)

City councillors never got to debate or seriously discuss a proposal Wednesday to claim special-permit power for big projects away from the Planning Board, despite their Ordinance Committee meeting for 3.5 hours.

The zoning change proposal by councillor Dennis Carlone was to be discussed by the committee, which consists of all nine councillors. But after three hours of public comment running 3-to-1 in favor, they lacked the energy to continue and adjourned until a to-be-scheduled meeting in August.

It was one of several meetings by different city government bodies on the Carlone petition. The petition is scheduled for a 90-minute public hearing before the Planning Board on Aug. 5. It got substantial public comment at the June 30 meeting of the full council when introduced, but the council chose not to discuss or debate it at that time.

Special permits let the planning and zoning boards allow certain structures and uses; the Carlone petition would change the city’s ordinance for one type of special permit – the Article 19 Project Review Special Permit required for most projects greater than 50,000 square feet. Unlike special permits that allow additional building height or changes to floor area or parking, the project review special permit  “ensure[s] that new construction or changes of use in existing buildings are consistent with the urban design objectives of the city and do not impose substantial adverse impacts on city traffic,” the ordinance says.  The Planning Board would still review a project and forward a report to the council before a decision.

The proposed change is one of several reactions to concerns with development in the city, including the city’s master plan process that began this summer; a committee to review Planning Board operations ordered by the council Monday; and the formation of the Fresh Pond Resident’s Alliance and Neighborhood Association of East Cambridge.

At the beginning of Wednesday’s meeting, vice mayor Dennis Benzan, who chaired the meeting, requested Carlone recuse himself from this hearing, which Carlone said he did “gladly.”

As councillors discussed how to proceed, Benzan repeatedly declined to call on Carlone, who raised his hand to speak.

Recusal of councillors from their own zoning petitions has not been Cambridge practice, nor is it required by council rules for either voting or debate. After the meeting, Carlone, a first-term councillor, said he did not understand the basis for recusal; “I don’t remember it before,” he said.

Benzan said the most important reason he requested recusal is “you cannot vote on your own petition,” and also said that Carlone’s position as committee co-chairman should mandate recusal.

The council struggled with a problem that has faced the Planning Board repeatedly in recent months: how to have an effective debate and discussion after many hours of public comment. The council did not succeed either.

The board has been criticized for a process that takes months when it adjourns a meeting without a decision, which means waiting weeks for another meeting to discuss an application. The council found itself in a similar position when debate began at 7:15 p.m. for a meeting that began at 4 p.m.

Mayor David Maher, noting he had obligations elsewhere, began by suggesting the committee merely forward the petition to the full council with no recommendation. That procedural step would postpone any action until the Sept. 8 regular council meeting. It would also discourage the council from debating the petition in detail, as the full council cannot discuss as freely as it can when it sits as the Ordinance Committee; the council will also have a heavy agenda for that meeting, as it returns after a six-week break.

Councillors Nadeem Mazen and Craig Kelley expressed concern about skipping committee debate. “There’s this undercurrent of anger,” Kelley said, and “we’re just going to inflame that more and make future positive discussions that much more difficult” by not debating the petition. Mazen is one of the 26 signatures on Carlone’s petition.

Councillor E. Denise Simmons initially sided with Maher’s proposal, but changed her opinion after Kelley and Mazen spoke. Simmons moved to keep the petition in committee, specifying that the meeting would not begin with public comment, but rather with the city planning and legal departments’ analyses of the petition.

Councillor Marc McGovern amended the motion to require the hearing to take place in August, rather than in September, over mild objection from Benzan. 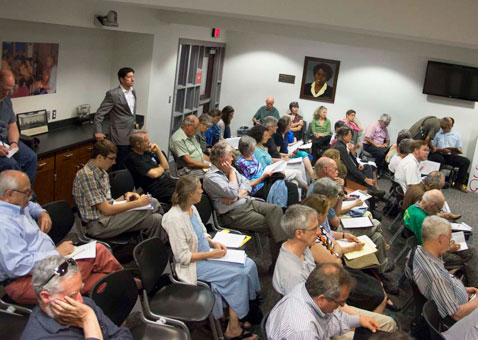 More than 50 members of the public came to the meeting to speak, some leaving before their name was finally called. (Photo: John Hawkinson)

More than 50 members of the public came to the meeting to speak. By rough count, 29 spoke in favor of the petition, 10 against.

Generally people who have opposed special permits for the three current large development projects spoke in favor of the petition; members of the Neighborhood Association of East Cambridge and the Fresh Pond Residents Alliance were particularly well-represented and vocal. People associated with developers, landlords, business interests and large institutions mostly spoke in opposition. Many speakers had left by the time their names were called, however.

Speakers on both sides of the issue repeated a common refrain: “The zoning for the city is broken,” in the words of Patrick Barrett, a Main Street landlord who opposes the petition. Barrett suggested the council would not be able to handle the workload the petition added.

Some public debate was concerned with politicizing the special permit process. Opponents of the petition feared monetary and other political interests would have increasing influence ondevelopment. Attorney James Rafferty, who regularly represents developers, cautioned the council that the law would not permit it to be “arbitrary and capricious,” but instead required adherence to the criteria of the ordinance; Rafferty suggested the law barred private (so-called “ex parte”) communications with members of the permit-granting authority. He opposed the petition.

“I trust you, our elected representatives, even more than I trust people who are not accountable to the citizens,” said Susan Yanow, also of Area IV. “If you don’t share the vision of the citizens, every two years we have a chance to let you know. You are accountable to us.”

Marie Elena Saccoccio criticized the Planning Board, saying: “Their vision of their role is extremely rigid; extremely narrow. I don’t think they even factor in discretion.”

Jan Devereux, of the Fresh Pond Residents Alliance, said the board had failed to consider cumulative impact from multiple projects in the Alewife area. John Howard, of the Porter Square Neighborhood Association, concurred, calling it “just doing Whac-a-Mole, one at a time.” Devereux reminded the room that the Carlone petition was only a stopgap, because it would last only until at the end of 2016.

“The task is to find out what [the board can] do well, and what they don’t do well,” said Steve Kaiser, a Cambridgeport resident and traffic engineer who favors the petition. “Can certain work of the Planning Board be better done by the City Council?” Kaiser asked. “How to make the Planning Board work better?”

Representing the Massachusetts Institute of Technology, Sarah Gallop favored the current project review process, highlighting the “extensive interactions with neighborhood residents, city officials, and the Planning Board” that MIT has had. Her counterparts from Harvard University were present at the meeting, but did not speak.

Residents who have interacted with MIT responded, with Carol O’Hare calling the institute a “captive citizen.If it does not accommodate concerns, it will suffer the consequences,” but warning that most developers would simply go elsewhere.

Mark Jaquith called the Carlone petition “an experiment worth doing.”

Community blogger and political watcher Robert Winters closed out public comment by calling the petition a “dreadful idea” and saying he was “adamantly opposed.” Winters compared the special permit process to “once upon a time” when there were rigid requirements in zoning with no review as long as a project met the written criteria. He asked the council to consider altering the special permit criteria written into the ordinance and pointed out that the council had still not adopted many of the recommendations from the city’s K2C2 study process for Kendall and Central squares. Those recommendations are stalled within the city’s planning department.

The Planning Board meets to consider the petition at 7 p.m. Tuesday at City Hall Annex, 344 Broadway.