‘Expendables 3′: Bloated sequel shows they don’t make ’em like they used to 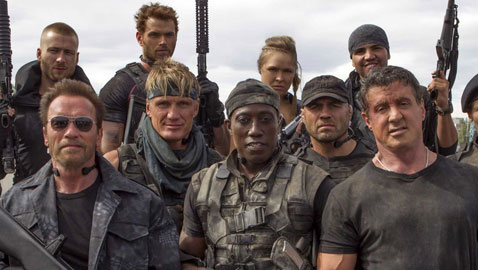 ‘Expendables 3′: Bloated sequel shows they don’t make ’em like they used to

Ah, “The Expendables,” the low-fi, big (former-)star-fueled franchise that started as a amiable insider joke but with “The Expendables 3” has grown big and bloated – like many of its mothballed stars – and thrown aside its agility and sense of humor. The previous two installments, directed by creator Sylvester Stallone and Simon West, smartly ran spry at under two hours; here in the hands of relative newcomer Patrick Hughes and at more than two hours, the film is not only overlong and annoyingly stilted at times, but also, clearly long in the tooth. 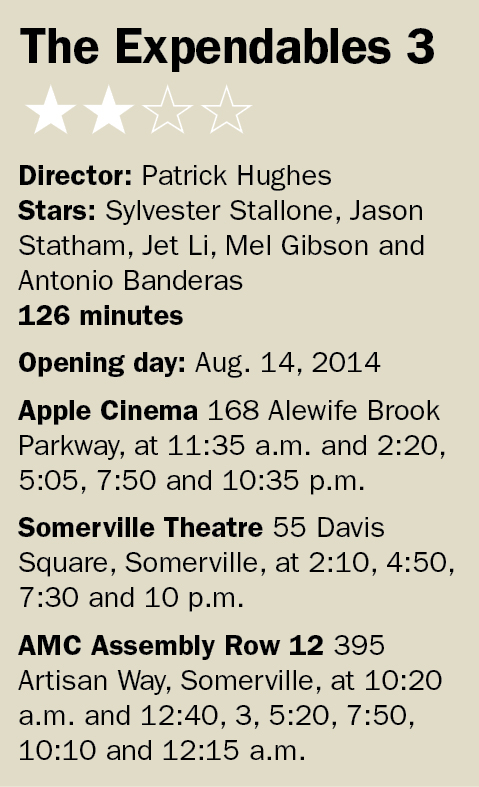 Old-school old guys schooling buff newbies with plenty of tongue-in-cheek ha-has was the way of the first films. “Expendables 3” starts off that way, somewhere in a Baltic/Eastern Bloc country with Barney Ross (Stallone), the series quarterback of a covert military ops group, springing an old colleague (Wesley Snipes) amid great, witty barbs about “tax evasion” and “blades.” Then it’s onto Mogadishu, where Barney and crew go on a routine mission to stop an arms trade and get their asses handed to them. The fly in the ointment, and adding to the heavy list of new names, is Mel Gibson as Conrad Stonebanks, who’s as bad-assed as the whole Expendables crew and arguably the dark side of Gibson’s already certifiable Riggs persona from the “Lethal Weapon” franchise.

Realizing he might get old chums – Dolph Lundgren and Jason Statham among the lot – killed going back after Stonebanks, Barney kicks off a youth movement and winds up with a series of generic 20-something hunks (Kellan Lutz of the “Twilight” series among them) and a woman named Luna (MMA fighter Ronda Rousey) who looks fetching enough in a red dress but can throw down with the best of the lads. Rousey isn’t much of an actress, but boy can she spin, flip and make the stunts look extra authentic. Of course she shows up most of the cast.

The first “Expendables” was fools gold. Here, the aged actioneers look stilted and silly without any satiric nuance, and the young ones add only a lazy sheen. The script is on-the-fly macho-mumble twaddle, and the direction is slack and unchecked.

Little of that matters when the explosions take center stage and guns blaze, and some of the casting retains its charm. Gibson adds real bite as the baddie and Sly’s decent, although he often looks like he’s carrying the weight of the world and needs a vacation. (In one spot-on exchange, Arnold Schwarzenegger – looking like he’s taken a Rip Van Winkle layoff from the gym – quips to Sly, “It’s time to get out.”) Harrison Ford shows up too, as a gruff old CIA handler, and Kelsey Grammer happens into the mix as a covert ops headhunter named Bonaparte who helps Barney assemble the young guns. Probably the best addition comes in the form of Antonio Banderas, an over-loquacious assassin who can’t land a gig.

I interviewed Stallone once, back a few years when he was directing the last chapters of his “Rocky” and “Rambo” films. He told me how he was influenced by Edgar Allen Poe when he introduced his beloved pugilist and wanted to shoot a biopic of the tortured poet. Somehow I think the “Expendables” is what the studios steered him toward.

At the end of “Expendables 3,” somewhere in a burned-out Baltic enclave, the old and the new teams hook up and bullets and bombs and tanks blast off aimlessly and in limitless supply – a discharge that would drive Sam Peckinpah nuts despite his reputation with films about violence. The indiscriminate ammunition is in stark contrast with one of the later efforts of the late, great director, his “Cross of Iron,” in which every bullet and every line had purpose. Peckinpah loved aged actors too – but when he used them they had character and dark pasts that spoke to you. They were men, not caricatures, unlike in this overstuffed smorgasbord of over-the-hill stars.

Maybe it’s CGI or Hollywood math or something validly else, but they just don’t make ’em the way Peckinpah made ‘em. Now there was a man who wasn’t expendable.