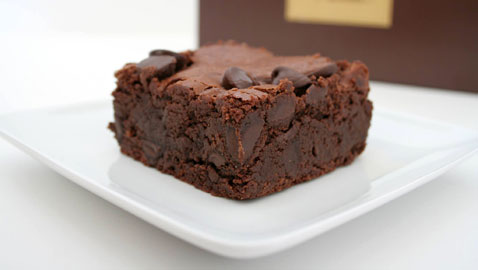 Yummy Mummy Brownies goes to farmers markets every day of the week, hitting eight communities including Boston, Worcester and Framingham. But despite joining the Kendall Square market just last year,  Yummy Mummy Brownies finds Cambridge is now one of its three biggest markets, said Melissa Roiter, founder of Yummy Mummy. She sells some 360 brownies each visit – for reasons that will seem obvious when you see the treats in the above video.

Founded eight years ago in Roiter’s kitchen in Westborough, Yummy Mummy has done mainly farmers markets and online or telephone orders. In a few weeks, it is going to open its first bricks-and-mortar retail store at 72 E. Main St., Westborough.

Roiter started with her grandmother’s fudge brownie recipe and has expanded to 15 flavors, including salted caramel, espresso, coconut, German chocolate and Oreo – a kids’ favorite.

Brownie are $3 each, or four for $10. The market in Cambridge is by the Kendall Square T stop at the Boston Marriott Cambridge from 11 a.m. to 2 p.m. Wednesdays through Oct. 9.  Yummy Mummy is working on a website here and has a Facebook page with contact information here.