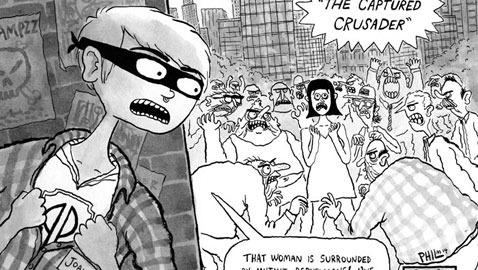 Punk bands Joanna Gruesome and Perfect Pussy have so many reasons to tour together. In addition to names that celebrate somewhat wryly but not ironically icons of femininity – performer Joanna Newsom and, duh, the vagina – they have matching weird origin stories.

It won’t be necessary to know the stories to enjoy their Wednesday show at The Sinclair (with Chicago’s Love of Everything and the return of Western Massachusetts’ Potty Mouth).

But lore has it that the founders of Joanna Gruesome, a five-piece Cardiff band, met at an anger management course. And Perfect Pussy’s singer and lyricist, Meredith Graves, says the Syracuse band started out fake, pulled together just to perform in a scene in a low-budget John Cusack film released last year, “Adult World.” (The band went on to realer things, obviously.)

Even better, the 7-inch comes with a 24-page comic book written and conceived by the bands and drawn by Phil McAndrews, an illustrator whose little brother, Ray McAndrews, is guitarist for Perfect Pussy. (The gif above of his work is by Kara Biasucci.) The comic book – with “Joanna G.” as the secret identity of a superhero who battles misogyny and, based on the book’s cover, Republicans – doubles as packaging for the record, which will be tucked into a little sleeve inside the back cover, the artist said. There are limited supplies of the package, the bands warn.