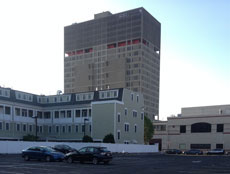 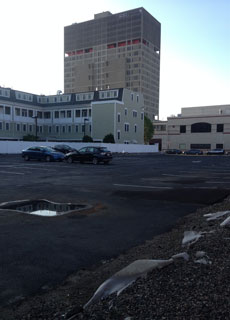 A plan to give more power to the City Council over large projects in two city neighborhoods died Monday in a 5-3 vote.

The petition, named after city councillor Dennis Carlone for proposing it in July, was seen by some as a last hope to block the proposed redevelopment of the former Edward J. Sullivan Middlesex County Courthouse tower in East Cambridge, because it would give the elected councillors review power for that and two large city projects in the rapidly overheating Alewife area – residences proposed for 75 New St. and at 88 CambridgePark Drive.

The failure of the Carlone petition means the Planning Board keeps its large-project review special permit powers required for most developments bigger than 50,000 square feet.

The expansion of powers for the council was to last 2.5 years, until the city had completed a citywide development master plan. An amendment proposed Monday that also failed 5-3 would further have kept the council from having special-permit power over projects in Kendall and Central squares and for Kendall’s John A. Volpe National Transportation Systems Center, 14 acres of federal property that the government now looks to redevelop on its own.

The petition was defeated despite those limitations, with debate among councillors seeming muddled. “We say it’s temporary. It’s not going to be temporary,” Councillor Tim Toomey insisted, and vice chairman Dennis Benzan cited at length the urgency to build housing to keep middle-income residents from being squeezed out by Cambridge’s high real estate costs, especially in Central Square, despite Carlone’s intention to keep development there out of his petition. It will be coming before the council anyway as a broader zoning vote.

The Monday vote would not have approved the Carlone petition itself, just pass it to a “second reading” so it could be debated before a vote.

Benzan and councillor Craig Kelley said after the meeting – a five-hour affair that was the first of the fall following a roughly two-month summer break – that further debate was unnecessary considering the attention the petition got since being introduced back on June 30. But on that date, councillor E. Denise Simmons referred the petition to committee without debate; when it arrived in Benzan’s Ordinance Committee a month later, there was three hours of public comment, but no council discussion. The first time the council debated it was a committee hearing Aug. 27 that took place after the publication of an op-ed by four councillors in the Cambridge Chronicle expressing opposition: Kelley, Toomey, Marc McGovern and Mayor David Maher.

“To have the council be the final arbitrator on projects that the Planning Board has already reviewed under the zoning the council has approved seems self-referential in a counter-productive way,” the four wrote, and Kelley repeated some additional concerns Monday: “We do have flooding and traffic issues to address. This petition doesn’t do that.”

The four also felt that “the likely result” of acting under Carlone’s petition was that no large-project special permits would pass – like Toomey’s concern, an outcome the council would control – while Carlone insisted Monday that he was confident council review would speed permitting while still allowing the Planning Board to weigh in via a recommendation, as it does for zoning.

“If I thought this petition would lead us to better place, believe me I would be supporting it. It would be the easiest thing in the world to do,” McGovern said, referring to the number of people he knew who supported the petition. “But I do think it has done a very important thing – of raising conversation about these issues. I want to assure people, we are listening.”

In addition to Carlone, the councillors voting for more debate about the petition were Simmons and Nadeem Mazen. Missing was councillor Leland Cheung, for whom Monday was the eve before the primary deciding whether he became the Democratic candidate for lieutenant governor.