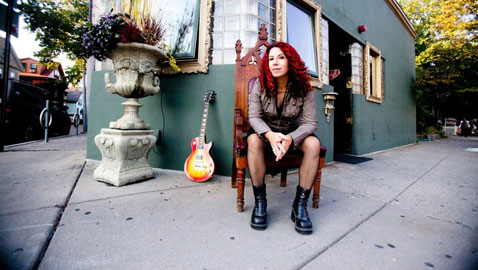 In February you could be enjoying music, dance, poetry and film telling the stories, surprises and secrets of Mary Magdalene (a scholar), Eve (whose name means “living”), Isis, the Queen of Sheba, Ishtar, Delilah, Joan of Arc, the Virgin Mary, Arya Tara and Kali in a project called “Bring Us Your Women.”

But not if the project doesn’t get funded.

Founder Catherine Capozzi has a Kickstarter for the project – a film anthology, 15-song studio album and the live, multimedia performance – that has about a week to go to raise about $9,000.

In addition to composer Capozzi, the talent involved will be familiar to some, including Somerville filmmakers and musicians Sophia Cacciola and Michael J. Epstein, poets Jade Sylvan, Megan Chiampa and Kristen Schaer, actor and storyteller Mark Phinney, photographers and artists Kelly Davidson and Kristilyn, animator Norah Solorzano and a slew of dancers, as well as other participants from New York, Amsterdam, Geneva and Paris.

Prizes for the Kickstarter range from a download of the first completed single from the album (among the things you get for donating just a $1 or more) to a private gig by the area superband Axemunkee (among the stuff you get at the $600 level), with guitar lessons or your own custom theme song among the options in between.

Capozzi describes the project as “dedicated to women and the pursuit of divinity and freedom”:

The essence of this work expresses the power of three – unity, tolerance, hope … This project seeks to tell existing and re-imagined stories of historic and mythical individuals, each presenting a message of humanity that transcends gender and religion. I am deeply passionate about these stories because of their relevance to our world today.

“These stories deserve to be told,” Capozzi said, “but can’t be told without your help.”

A peek at a “Queen of Sheba” segment from the first live test-run of “Bring Us Your Women” in November is above. Here’s the Kickstarter video explaining the project: