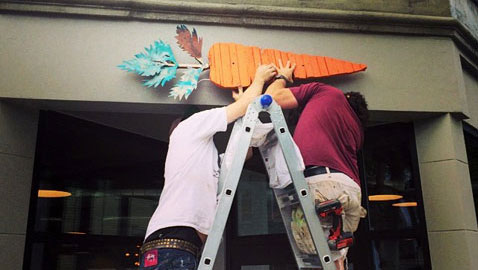 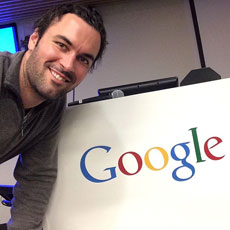 Innovative chef Adam Melonas pauses during an April talk at Google sponsored by a collaboration between the Massachusetts Institute of Technology and the Culinary Institute of America. (Photo: Adam Melonas)

Cambridge’s three-member License Commission may make master chef Adam Melonas do something at Chew he’s refused to do in any previous restaurant on five continents: compromise.

Chew is a 58-seat molecular gastronomy restaurant at 279 Western Ave., in the Riverside neighborhood, a space that sat empty for three years since the closing of the Ebony Club and a next-door laundromat. Construction has been complete for as much as three months.

All Chew lacks is a menu.

Melonas wants it to serve as kind of a test kitchen, “open on an infrequent basis” to try out dishes for its own tables and for customer restaurants around the world until a full menu is ready to go.

“The restaurant I opened in Dubai, it took me nine months on the menu – not through inefficiency but through the fact that the particular type of cooking that I do takes a very long time to develop what these particular [cooking] techniques are, because these techniques don’t exist today,” Melonas told the commission Tuesday, asking for six months of being quasi-open for business from 5 to 11 p.m. seven days per week.

“So throughout this next period obviously I am in there innovating, I’ve got food scientists and other chefs in there every single day creating these things,” he said. “If we aren’t able to open the doors in the next six months, then we can’t test them.”

“Our licenses don’t allow for that”

This was a problem for the commissioners, who said restaurants have to be open to serve customers for the hours they approve.

“Your concept doesn’t fit within the constraints of the license, that’s the problem,” Police Commissioner Robert C. Haas said. “You may have been able to do that in other countries, but our licenses don’t allow for that.” 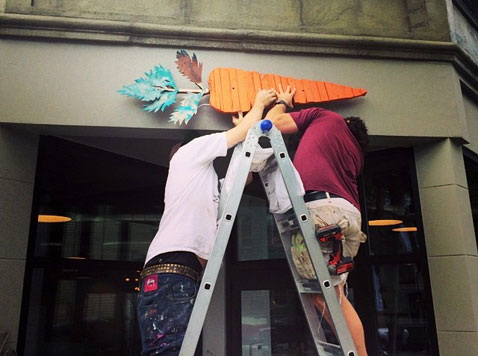 The chef and commissioners moved haltingly toward an understanding, with Melonas at one point suggesting they think of the restaurant as open for dining, but only with reservations, possibly with waits of up to three or six months to get in – as at some of his restaurants overseas. When that turned out to be non-starter, Melonas explained that each of his restaurants have had a test kitchen associated with the main kitchen, but “this is kind of one and the same in that the doors aren’t officially open yet … It’s going to take a long time to get it started up. We’re doing a lot of menu innovation.”

Haas seized on that thread, suggesting that Melonas bring back menu items from his previous restaurants.

“The problem is distraction. There was a chef who I was working for for a period – he’s the No. 1 chef in the world – and he said [customers would] hold him back. He’d rather close the restaurant than be distracted and have food not progress as fast,” Melonas said. “In this particular model, I will also say that I’ll never serve anything in a restaurant that I haven’t created in that particular restaurant. So, yes, I could bring back one of the thousands of dishes that I’ve created in my past, but those are old. The objective is that everything we do has to be brand-new, created there at that particular location.”

Next Haas suggested that Melonas use a single member of his cooking staff to serve a “base menu” while the rest of his chefs and food scientists went on experimenting.

But Melonas had another thought, and asked whether there was a limit to how few hours he could be open each week – even down to a single day.

Haas assured him that so long as he was actually open during whatever times he requested and were approved, he could have as few hours or days as he wanted.

The only concern, Haas said, was how Chew could survive financially using that approach, but the chef dismissed those worries with a casual “That part’s fine,” reminding the commissioners that part of his team’s work was to create menu items for other restaurants, serving as a Q Branch of clever cuisines that could be scaled and exported to dazzle diners globally.

Despite a compromise looking close, the commissioners and Melonas agreed to table the conversation to an unspecified future meeting.

The promise of Chew adds to Cambridge’s luster as a space for breakthroughs in food as well as technology, biotech, software and energy innovation. Le Laboratoire Cambridge and Cafe ArtScience, the Kendall Square outpost of a French science center, is set to open Oct. 31 at 650 E. Kendall St. The city is the birthplace of Le Whif, the inhalant chocolate invented by Le Lab founder David Edwards, and even the “Cooking for Geeks” empire of Jeff Potter.

There’s a solid addition to that roster in Melonas, who chose the location of Chew in part because of its proximity to partners at Harvard and the Massachusetts Institute of Technology and hopes for “a high level of cross-pollination between these particular intelligent establishments and my own business.” In addition to his experiences in high cuisine – professional cook at 14 in his native Australia, first head chef at London’s Otto’s at 19, chef de cuisine at the Sunbar Restaurant and Lounge in Brisbane, Australia, and Dubai’s Amwaj, head chef at Shanghai’s Jade on 36 and again at Dubai’s Al Mahara – he has served as head of the innovation lab at the La Terraza del Casino at the Casino De Madrid and contributed food concepts and techniques at chef Ferran Adrià’s El Bulli in Spain (billed as “undoubtedly the most controversial and experimental restaurant in the world”). He is also the co-founder of Boston-based Unreal Brands, the maker of  “unjunked” candy he said can be found in 34,000 stores nationwide.

Here’s how he described his restaurant work to commissioners:

It’s technically considered progressive cuisine – I think in America you call it molecular gastronomy. In short, it’s about intelligent cooking, it’s about understanding your ingredients to maximize the potential of each. I incorporated this company with the mission and endeavor to A, create brand-new dishes and B, make them healthier and more sustainable for the environment.