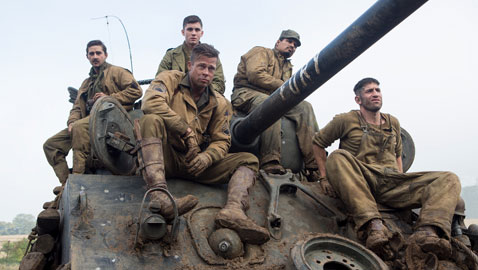 “War is hell,” a tried and true axiom that gets personified to the nth degree in David Ayer’s World War II epic about a tank crew uttering a book full of clichés and live out religious allegories while quoting the Gospel. Ayer, who wrote “Training Day” and directed such smash-mouth dramas as “Harsh Times” and “End of Watch,” has his nose deep in male bravado and bonding. 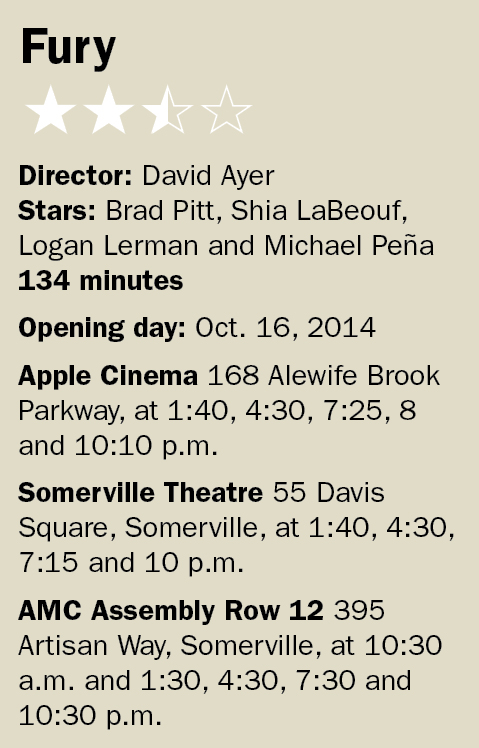 The scribe turned helmsman could probably learn a thing or two from Paul Schrader, who penned “Taxi Driver” but had mixed success transitioning to the director’s seat with the likes of “American Gigolo,” “Cat People” and “Light Sleeper.” Schrader, however, was interested in character-driven stories, whereas Ayer likes square-jawed manliness amid chaotic hells punctuated by hyper violence. Sam Peckinpah had it covered from both sides, and the fact that he did – and that many have attempted to emulate his style and resonance and failed – only strengthens the testimony to his unbridled cinematic genius.

Right from the get-go Ayer lets us know this isn’t the clean, moral war captured on black and white back in the ’40s and ’50s, but something darker and more complex. Coming across a bomb-blasted field of American tank carcasses, an SS officer on a white horse checks the carnage to make sure there’s no survivors. For someone to be alive doesn’t seem possible, but springing from atop one steel beast is Brad Pitt, who quickly puts a knife blade through the officer’s occipital and unsaddles the horse, allowing it to go free – a metaphor for the freeing of white Europe by the grubby Americans?

Pitt’s “Wardaddy” (real name Don) is the most kempt of an unseemly lot that includes a Mexican named Gordo (Michael Peña) who’s not allowed to speak Spanish, an uncouth backwoods hillbilly (Jon Bernthal of “The Walking Dead”) referred to as “Coon-Ass” Grady and Shia LaBeouf, last seen naked and huffing away in Lars Von Trier’s “Nymphomaniac” series, as Boyd “Bible” Swan, second in command. They’re a battle-loving bunch who kill Germans with all the relish of the Jewish detachment in Quentin Tarantino’s “Inglourious Basterds”; but this ain’t no revisionist black comedy – “Fury” is dead straight, and since it’s 1945 and post D-Day you can almost see Ayer angling the movie to be the back-half bookend to Steven Spielberg’s “Saving Private Ryan.”

Amid the bleakness, much relative good shines on the crew of the Sherman, affectionately branded the same name as the film’s title. Over many encounters it remains the last armored standing. But in a tank, where no bullet can take you, there are many other ways to die – namely head-to-head with the superior German Tiger, which is near impervious to the Sherman’s cannon. Since this is late in the campaign, the men of the Fury are working behind enemy lines and on German soil. Most of what they have to do is save fellow troops trapped in pockets, or take a small town. Besides an enthralling chicken-fight with a Tiger, the best action in “Fury” comes when the boys are outside the metal wrapper they call “home.” What really brings the potent potpourri of personalities to a head is a boyish, war-green private named Norman (Logan Lerman, the wide-eyed young actor best known for playing “Percy Jackson”), new to the crew, who becomes beguiled by a young fräulein that Gordo and Grady also want a go at. Sex and war blended together go far to bending ethic, but here, something that should be chilling or at least edgily disturbing renders as banal and inert, like a bunch of insipid frat boys at a “Girls Gone Wild” festival – a morality-plumbing opportunity that Brian De Palma tapped in the under-appreciated “Casualties of War.”

Much of “Fury” hangs on Pitt, and he carries the load dutifully, though Wardaddy’s dicey blend of blood-lusting avenger and reflective soul never fully marries, which is true of much of Ayer’s vision; it never quite registers the true organic essence of men in war the way “alternative” World War II gems such as “The Big Red One” or Peckinpah’s “Cross of Iron” did. Ayer has clocked in a gorgeous-looking effort – it was filmed mainly in England, where Stanley Kubrick shot much of his Vietnam War classic, “Full Metal Jacket” – and it is full of ambition and drive while overall rudderless. It’s a film searching for soul and purpose, which ultimately comes in the crucible of fire when the Fury five make a “300” stand against a sizable SS unit.

“Ideals are peaceful. History is violent,” Wardaddy says. Words and stabs at profundity are easy; getting at character and heart, now that’s where the diesel meets the dirt.