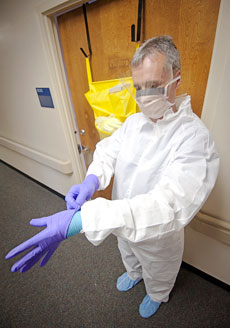 Hospitals around the country are taking precautions against personnel catching Ebola from patients. The Cambridge Health Alliance, like the University of Mississippi Medical Center, is adopting some safety standards beyond what the U.S. Centers for Disease Control and Prevention recommends. (Photo: UMMC)

Cambridge Health Alliance leaders have beefed up Ebola plans, upgrading protective equipment for nurses and doctors and deciding to send any patients with symptoms and a suspect travel history to higher-level hospitals in Boston instead of admitting them for treatment here.

“It is profoundly difficult to treat,” medical director of infection prevention Dr. Lou Ann Bruno-Murtha told Alliance trustees Tuesday. Besides, she said, the manufacturer of the Alliance’s blood analyzers advised against using the equipment to handle the blood of suspected Ebola patients because the analyzers haven’t been shown to work after the kind of cleaning that would be required.

After a nurse was infected from caring for Thomas Duncan, the man who died at a Dallas hospital after traveling from Liberia, “we went to a much higher level of personal protection equipment”: a one-piece suit plus respirator, said Christian Lanphere, director of safety and emergency management.

Lanphere said the equipment exceeds the latest protection standards recommended by the U.S. Centers for Disease Control and Prevention. The CDC has stiffened its advice several times as a second Dallas nurse became infected and disclosures made it clear the hospital there was not adequately prepared.

A spokesman for the other hospital in Cambridge, Mount Auburn Hospital, didn’t respond to a message left Tuesday asking how the hospital was preparing for the possibility of patients with Ebola symptoms.

At the Alliance, emergency room staff members are being trained to put on the new suits and respirators and to take them off safely without getting contaminated, Lanphere said. If employees have to use the suits in real life, another staff member will watch them put on and take off the equipment to help them avoid errors.

Officials are preparing to train doctors and nurses at Alliance clinics, which include 15 primary care offices in Cambridge, Somerville, Medford and Everett, spokesman David Cecere said.

Any patient with Ebola symptoms, which include fever, vomiting or diarrhea, will be asked for a travel history, even if they come to the hospital for another reason, such as signs of a heart attack. Those who might have the virus will be transferred to a Boston hospital, Lanphere and Bruno-Murtha said.

If a patient develops symptoms after being admitted to the hospital for another reason, he or she will also be sent to Boston. One trustee asked about protection for nurses and doctors who care for such a patient before any suspicion of Ebola. “I’m depending on universal precautions,” Bruno-Murtha said, referring to routine practices such as hand-washing and gloves. “I’m somewhat reassured that none of the family members of Mr. Duncan got infected.”

Bruno-Murtha and others emphasized that the possibility of encountering a patient with Ebola was extremely low, here or elsewhere in the United States. “We will lose more patients to the flu this year than to Ebola,” Bruno-Murtha said. Alliance Chief Executive Patrick Wardell said protecting against the flu was even more important this year than previously because of fears about Ebola, because “people will get sick [with the flu] and think they have Ebola.”

The Alliance is in the midst of its annual flu-shot campaign, urging patients to get vaccinated and offering vaccine clinics around the city. After the Tuesday meeting at Cambridge Hospital, some trustees got flu shots. All are required to get vaccinated or give a reason for declining, Cecere said. Officials don’t know yet how many trustees have received flu shots, he said.