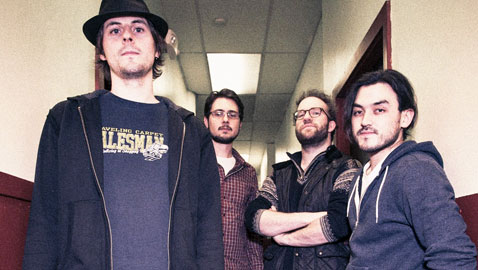 As big as the Thompson Twins were in the 1980s with anywhere from three to seven members and Ben Folds Five were in the 1990s as a trio, Ryan Jackson Troika could be the biggest of them all now – with four members.

The Allston band has a sublimely heavy, prog-rock sound – part of a growing progressive scene with bands such as SchoolTree, which shares a band member: bassist Derek Van Wormer. Other Troikaists are drummer Chris Anderson and keyboardist Peter Danilchuk, along with Ryan Jackson himself singing and playing guitar. Jackson has been on the scene for more than a decade in bands including The Shills, School for Robots, The Doctors Fox, Left Hand Does, Ellis Ashbrook, Perhaps and Strange Changes. The Troika lineup has been in place since 2012 and released the album “Plethora” last year.

Its a band that loves King Crimson, Frank Zappa, Yes, Rush and Focus as much as Mutemath, Queens of the Stone Age and Porcupine Tree, and it’s readying a full-length release for next year.

Check out a couple more of the Troika’s insanely good noise:

Along with Ryan Jackson Troika, the night includes the Jennifer Tefft Band, Stone Giant, Apoena and Pam Steebler, a pop-soul singer – Canadian by way of Brazil – who’ll please fans of Adele, Pink and Kelly Clarkson with her EP release.

Check out her peppy “Me And You” here.

The bands start at 7 p.m. Thursday at The Middle East Downstairs, 480 Massachusetts Ave., Central Square. Tickets are $10 in advance and $12 on the day of the show for this 18-plus show.