Don’t be in such a rush to give up council checks, balances to power of city manager 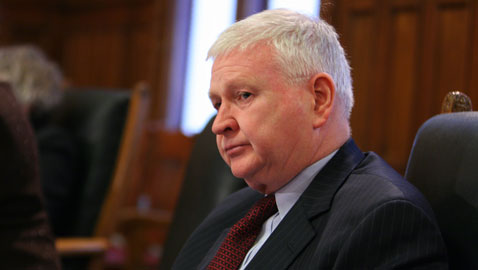 Don’t be in such a rush to give up council checks, balances to power of city manager

Two of our longest-serving city councillors – Mayor David Maher and state Rep. Tim Toomey – argued last week in favor of being a rubber stamp to the city manager on his power to appoint, which means they argued against their own oversight powers and city law.

This bid for surrendering power came up because of a requested five-year reappointment of chairman Gerald Clark as one of the five-member board of commissioners for the Cambridge Housing Authority, on which he has served for four decades. The council opted for a discussion in its Housing Committee first. (Clark can keep on serving as a holdover member until there’s another appointment.)

But Clark wasn’t really the issue, as councillors have said repeatedly that they should think more about who’s being appointed by the city manager in the context of their goals for city commissions and boards. “I’ve lost this discussion in the past, I may lose it again today, but I know last time we had it, it was ‘Yeah, next time something comes up, we will in fact have a committee meeting to talk about it,” councillor Craig Kelley said Thursday. “This might be the perfect person, there might be another person out there that’s more perfect, or some need we don’t feel is getting met. Until we meet to talk about it, that won’t happen.”

Further, Toomey – first elected to the council in 1989, more than a quarter-century ago – was alarmed incorrectly that having the council claim its legal prerogative on appointments was “opening Pandora’s box.”

“The city manager appoints probably literally hundreds of people to boards and commissions, so this is going to open the door to us saying ‘We want that person to come before us’ for any committee or any commission,” Toomey said. “Precedent is being set – we’re talking about every single appointment …  could be before us.”

This is just wrong. Rossi explained that there are only two kinds of appointments he makes that are subject to council confirmation: to the city’s Redevelopment Authority and Housing Authority. In every other case in which an appointment appears on his agenda for the council, “essentially what I am doing is notifying you that I have made the appointments,” while in this particular case “I am notifying you that I am prepared to make the appointment, subject to your confirmation.”

Amazingly, Toomey rejected the city manager’s explanation and continued to insist that by using its power, the council opened the door to every appointment, because “whether it’s the Kids Council or anything else, some councillor could say, ‘Well, I’d like to have further discussion.’” That misses the point that a council vote against an appointment – Rossi made seven the same night to the city’s GLBT Commission that the council affirmed – would be recorded as a rejection but not affect the appointment in the slightest.

It’s good to remember that this is the council that plans to talk in its Government Operations, Rules and Claims Committee about changing the name of its policy orders because of a belief that the council can’t order the city manager to do anything – that, in fact, the only power councillors have over the city manager is to hire and fire. The Kelley-written Sept. 22 policy order calling for this discussion, just the latest proposing to end the term “policy order” because it “helps create unreasonable expectations of exactly what the city manager is being asked to do,” was explained in an item by Sara Feijo of the Cambridge Chronicle:

People get understandably confused by the idea that we can order, in all caps, the manager to do something, but in fact it’s not really an order,” Kelley said. “It’s a request and it should be a request.”

Feel free to debate the wording and meaning of the city’s charter (it is “the duty of the city manager” to see that “the ordinances, resolutions and regulations of the City Council are faithfully executed”) as much as people debate clauses in the U.S. Constitution, but it is peculiar to see a mayor who’s served 16 years on the council and a member who’s been there 26 years seek to give up a clearly spelled out, long-standing if little-used check and balance to the city manager’s power, especially considering how eager the council seems to embrace its general lack of power.

Maybe it’s best to remember that as much as this council admires Rossi, who was appointed to a three-year contract in December 2012 after serving as deputy city manager since 1981, his tenure may end as soon as June 30, 2016, and there could then be another city manager lacking the same trust as Rossi has built in the city over the past 34 years. Since it is not clear what, if any, work the council has done toward preparing a city manager search to be ready for the end of Rossi’s contract 17 months from now – the council failed to meet its own deadlines for either a short- or long-term process to replace the previous city manager, Robert W. Healy – how sure are these elected officials that their next appointed chief executive will reflect so literally unquestionably the wishes of them or their constituents?

If they’re going to give up power so readily to the city manager, they should remember another conversation from Thursday in which councillor Leland Cheung thanked Rossi for simply following up on repeated council orders – er, requests – for a study about a “linkage” fee formula that hadn’t been adjusted since 1988, costing the city millions of dollars for affordable housing and resulting in a potential increase, to account for changes over the past three decades, of 431 percent.

Healy never complied, but Rossi did.

“I wanted to thank you for finally actually having the courage to do the nexus study,” Cheung told Rossi.