Linkage fee study: Don’t scare builders, charge only up to $12 per square foot 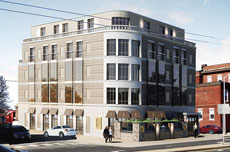 Linkage fee study: Don’t scare builders, charge only up to $12 per square foot

A study set for unveiling at a City Council meeting Thursday (after a snow delay from Monday) sees 4.6 million square feet of business space being added in Cambridge over the next 10 years and suggests that its builders contribute $10 to $12 for each square foot to help grow the city’s stock of affordable housing.

Called “linkage,” the formula hasn’t been updated in Cambridge since it was set at $3.28 in 1988, although the rate has risen to $4.58 to reflect incremental growth in the consumer price index. The council got a 2002 study that suggested raising it to $7.83, but never acted on it.

The $12 maximum suggested amount isn’t even half of what the study by Karl F. Seidman Consulting Services identifies as the actual per-square-foot impact of the coming development: $24.30, or more than five times the current rate.

Why is the recommendation so far below the actual impact? To not scare off developers.

“If the housing contribution rate is too high, it could impact development decisions, resulting in less commercial development in Cambridge,” said Brian Murphy, assistant city manager for community development, in an introduction to the study. That means “less new funding for affordable housing, as well as other impacts.”

The proposed rates still could leapfrog housing linkage fees in Boston – a total $10.01 per square foot – and are far above Somerville’s $5.15 per square foot.

It would almost double the current rent differential between West Cambridge and 128/MassPike for office space, bring Cambridge’s average office rents closer to Boston’s Financial District and cement East Cambridge’s current status as one of the region’s highest-priced office locations. For lab space, it would add to Cambridge’s existing large premium over the suburbs but have less impact on Cambridge’s competitive position versus Boston due to the limited supply and high cost of laboratory space in Boston.

“While this level of rent increase may not deter major pharmaceutical and [tech] companies from locating in Cambridge, there is more risk that small and early stage firms would be unwilling to pay increased Cambridge rents and would locate outside of the city,” the study says.

But Cambridge also left money on the table over the past dozen years. Not acting on the 2002 study cost the city $3.9 million and a possible 13 units of affordable housing, councillor Dennis Carlone said in September, after asking in May for a new so-called nexus study about linkage fees. The city’s affordable housing wait list is being frozen with some 9,500 households hoping for a Cambridge address.

Carlone doesn’t support a linkage fee that at best halves the impact rate.

I appreciate the work that has gone into preparing the new incentive zoning nexus study, [but] why would we want to settle for something in the $10 to $12 range? After all, we are in the middle of the what is probably the hottest real estate market in the nation, and it’s the market that has made this city unaffordable for people with low-, moderate- and middle-incomes … For too many years, the City of Cambridge has not sought appropriate housing contributions from the commercial sector. We know, now more than ever, that the need is there, and we need to be willing to do more to meet that need. With some 4 million square feet of commercial development anticipated over the next decade, this is a tremendous opportunity to advance our affordable housing goals.

“My view is that we should start the linkage fee debate in the $15- to $20-per square-foot range. Such a figure would do more to realistically meet the needs of low-, moderate- and middle-income residents,” Carlone said.

The Cambridge Residents Alliance group wanted the full impact price of $24.30 applied to linkage for all buildings over 30,000 square feet. “The $10 to $12 range is too low to dig us out of the hole we’ve dug by not raising the rate and by exempting so many of the large projects,” the group said in a letter presented to the council Thursday, at a meeting delayed from Monday by a blizzard. Even at the full amount, “we’d still have a big deficit” because the rate reflects only new construction.

Mayor David Maher, who was a councillor in 2003 and co-chaired the committee handling linkage, said one reason he ignored the previous attempt at raising linkage fees was the limitations on what projects were affected. He wanted a smaller fee applied to a larger percentage of development, according to meeting minutes from more than a decade ago, as well as to see universities covered by linkage, and not just for their commercial properties.

Existing linkage fees cover “but a tiny fraction of the development that is happening in the city of Cambridge. And it is something we need to look at. I am in full support of expanding the scope of what is covered by linkage as well as the amount of money that is collected,” Maher said  in May. “But this is a teeny, teeny Band-Aid on a much larger problem.”

The study proposes changing that.

Linkage now applies only to nonresidential developments getting certain special permits, which is a minority of nonresidential development. The study recommends adding hotel, industrial and private institutional – “and eliminating entirely the special permit trigger so the law would apply to all projects of more than 30,000 square feet,” Murphy said.