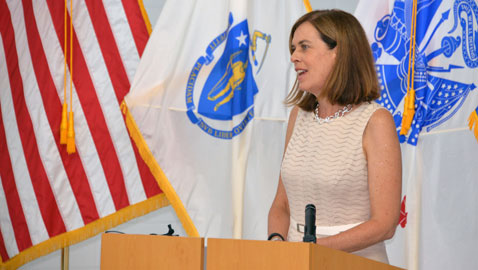 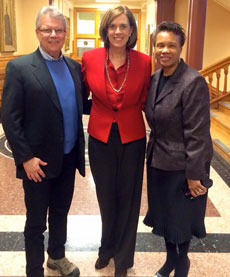 U.S. Rep. Katherine Clark was in Cambridge on Thursday at the Girls Only Leadership Development program and visiting with city councillors Dennis Carlone and E. Denise Simmons. Clark is back Tuesday for a panel discussion.

The role of early education in preventing domestic violence and the role of federal funding and oversight are among the topics assured a hearing Tuesday at a free panel on domestic violence policy led by U.S. Rep. Katherine Clark at Lesley University.

Clark intends to pack in a lot, including conversation about addiction and other factors that can fuel violence; who is at risk; and individual empowerment and action. Clark will also ensure the public is afforded plenty of time for questions and discussion, said John Sullivan, director of communications for the university.

“No one should have to make the choice between leaving an abusive situation and ensuring their pet’s safety,” Clark said.

Among the panelists is Catherine Koverola, dean of Lesley’s Graduate School of Arts and Social Sciences, whom Sullivan said has more than two decades of clinical experience in the field of interpersonal violence, and now oversees domestic and global programs in counseling psychology, trauma therapy and mindfulness.

Also speaking is Risa Mednick, executive director of Transition House in Cambridge, a nonprofit offering housing options and support to survivors of domestic violence and their families, as well as youth dating violence prevention education and peer leadership programs for youth.

The panel is rounded out by Mary Gianakis, director of the Framingham-based Voices Against Violence, which works with survivors of sexual and domestic violence to ensure their safety, create stable home environments, gain independence and develop personal and economic self-sufficiency.

The 90-minute forum, which is free and open to the public, begins at 7 p.m. and is in Lesley University’s Hall Amphitheater, 1815 Massachusetts Ave., Porter Square. Parking for a fee is available behind University Hall, accessible from Roseland Street, and the building is near the Porter Square stop on the MBTA’s red line.