‘Chappie’: This RoboCop is street smart, and South Africa’s better than ‘Elysium’ 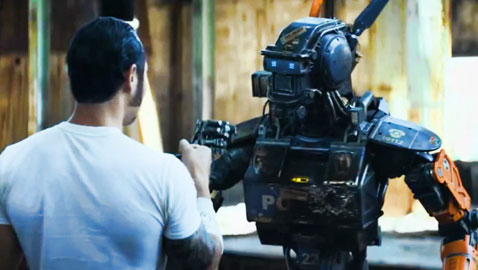 ‘Chappie’: This RoboCop is street smart, and South Africa’s better than ‘Elysium’

Is Neill Blomkamp the next M. Night Shyamalan? Hard to tell from his latest, “Chappie,” a near-future tale in which a robo-cop gets infused with AI and falls in with the wrong crowd. The good news is that Blomkamp’s third feature is a step up from the pedantically plotted “Elysium” – but it’s nowhere near his cutting-edge debut, “District 9,” which had sci-fi fans hoping for the next coming of Ridley Scott and James Cameron (the early incarnations). 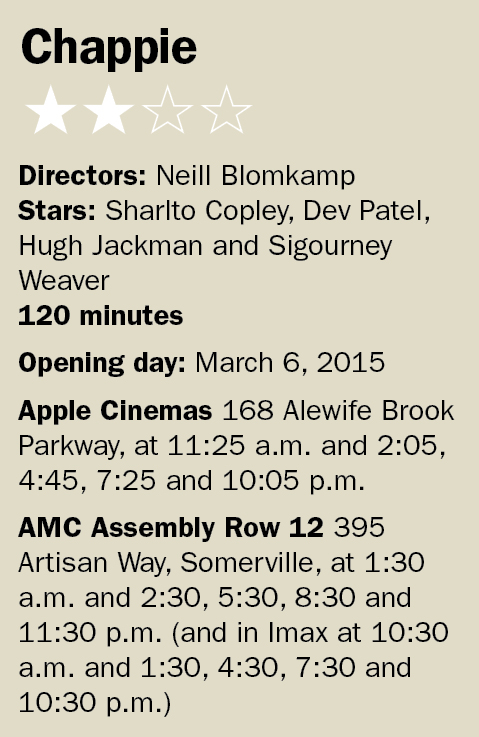 “Chappie” also takes Blomkamp back to his native South Africa and the grimy post-apocalyptic ghettos where “D9” took place, where the FX auteur clearly feels more at ease. Much of what transpires is borrowed heavily from Paul Verhoeven’s brilliantly biting satire, “RoboCop” especially “The Moose” – a clear (homage?) clone of the mega bipedal ED-209 that RoboCop has to go titanium to titanium with. It’s 2016 and Jo’Burg (Johannesburg) has remedied its rampant crime problem by contracting with an arms dealer to build and deploy lanky humanoid droids (they look something akin to the battle ’bots in the last “Star Wars” trilogy) to embed with police forces. They make great shields, hardly ever miss and never tire.

Chappie, the ’bot of the title, is an assemblage of scrap parts put together by an engineer more interested in science than big bangs or big bucks (Dev Patel from “Slumdog Millionaire”) and injected with code that can allow him to learn, feel and essentially be human sans the flesh. Problem is, Jo’Burg is rife with thug life, mostly ripped, tatted white guys with grillz and cornrows who clearly model themselves after Gary Oldman in “True Romance.” Through a plot twist not worth going into, Chappie ends up in the hands of Die Antwoord. What, you’re probably asking? That’s the name of a South African music act (give a google and watch a few videos and be amused or horrified, as it may be) and the duo, Ninja and Yo-Landi Visser, play street punks (I’m not sure if there’s any real acting, as the pair maintain their name and smash mouth personas) who pull Chappie into their service as he begins to learn and grown his consciousness – hopefully in time for the big heist.

The real gem here is Sharlto Copley, who live-action acts Chappie much in the same way Andy Serkis brought Gollum to life in “The Lord of the Rings” trilogy. His incarnations of Chappie as a shy, recoiling naif unaware of much in the world and infant-like in mannerism and need, and later as a ghetto-talking thug brimming with swagger, are palpable, fresh and lasting. Other than that, much of what Blomkamp sets out to do becomes a maddening snarl of bits of other movies (“Blade Runner,” “E.T.” and “*batteries not included,” to name a few) and motifs that span creation, the precipitous edge of human reliance on machines and state of consciousness versus corporal being that never quite cook together. Part of that has to do with the ghetto garishness and seeing Hugh Jackman in too-tight ranger shorts and a mullet. What could have been an interesting turn – to see the affable Aussie play against type – gets pulled under as he fills a plot-point checkbox as the jealous arms designer behind “The Moose” and at ideological odds with Chappie’s creator. Sigourney Weaver fares somewhat better as the money-minded CEO lording over the two scientists.

Overall “Chappie” fizzles, a cinematic short circuit that could have been. Blomkamp’s great visuals stand tall here, as they did even in “Elysium.” Allegedly Blomkamp’s on the docket to direct the next installment in the “Alien” franchise. It may be a good turn – Blomkamp reined in and enriched by someone else’s material and vision. Only the future will tell.