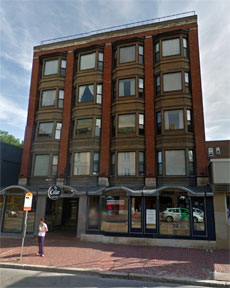 The building at 991 Massachusetts Ave. is owned by Steven Kapsalis and includes his bar, Cellar Wine & Spirits store and Garden at the Cellar restaurant space. (Photo: Google)

Lawyers for a local business owner were upset Tuesday to find a liquor license transfer delayed by a multiple-count investigation of how the license was granted in the first place and a handful of related issues.

Steven Kapsalis, owner of a 991 Massachusetts Ave. bar, Cellar Wine & Spirits store and Garden at the Cellar restaurant space, arrived at his hearing before the License Commission with a transfer to longtime partner Marilyn Carter in hand and two lawyers at his side. But chairwoman  Andrea Spears Jackson said there would be a delay.

“The staff of the License Commission will be assigned the task of investigating the allegations the commissioners have heard. As these allegations, if proven true, could impact the licenses held by Mr. Kapsalis, I’m of the opinion we shouldn’t necessarily act on the application for a transfer tonight and that we continue this matter until the investigation is complete,” Jackson said. She wanted the lawyers to respond in writing to the allegations.

The matter could be handled within 30 days, she said, agreeing that the lawyers could ignore three of seven matters under investigation, as one had to do with forged names on a petition by an employee of Kapsalis and is already being heard in criminal court; and two relate to how Kapsalis closed one restaurant and opened another without permission or licensing, and whether he had renovations done in the interim without permission, and Jackson said they might be resolved by the commission calling the city’s Inspectional Services Department directly.

That still leaves the question of whether Kapsalis falsified his application in 2005 for the license being transferred and compounded the problem during license renewals; if he handled his restaurant alcohol license incorrectly when allowing others to run a restaurant in his property; and the main issue – whether he should have been allowed his 2005 liquor store license in the first place, since the law says the same person isn’t supposed to have a restaurant “pouring” license and liquor store license in the same city.

Attorneys James Rafferty and Walter Sullivan expressed equal dismay over the sudden appearance of the seven-count complaint and delay in license transfer, but Rafferty – for years a nearly ubiquitous presence at development and licensing issues in the city – did most of the speaking.

“I’m not sure of the relevance of much of these items as to the transfer,” Rafferty said, reminding the commission that the action was being taken as a response to a commission demand made Feb. 13, when its members acknowledged Kapsalis illegally owned two licenses, and had for a decade.

One question that could affect the case is whether Kapsalis’ license fell out of compliance with the law or never should have been issued in the first place, and it might mean the difference between whether his license can be transferred to his partner or should be revoked completely.

When Rafferty argued that the licenses “are not held by the same individual,” but by two separate corporations, Jackson pursued a line of questioning probing that area.

“Who are the officers in each of the corporations?” she asked.

“For both?” Jackson asked.

“Two different corporate entities, but essentially owned by the same person, is that correct?” Jackson asked.

“No, that’s not correct,” Rafferty said, but his answer never got around to saying why it wasn’t, and even affirmed that Kapsalis did wholly own Kapsco Inc., leaving the only question being about Kapsalis’ other company, JCSK Inc. The most recent corporate filings for the two are essentially identical, with Kapsalis identified as president, treasurer, secretary and director. Carter is listed as the registered agent for each at Kapsalis’ property at 991 Massachusetts Ave., and each has 100 issued or outstanding shares out of 1,000 shares with a value of zero dollars. Rafferty was contacted Wednesday and Thursday for clarification, but he did not return calls after his office suffered a phone line problem Wednesday.

On Tuesday, though, Rafferty chose to underline that it was the commission itself that approved the liquor store license in 2005, after he presented it to them for Kapsalis:

The license information regarding both corporations remains unchanged since the filing of the application before this commission in 2005. Nothing has changed since 2005 when this commission approved that and the [state Alcoholic Beverages Control Commission] similarly approved it … I have been representing Kapsco Inc. since that time. I personally prepared the application in 2005 that was acted upon by the License Commission and the ABCC.

Indeed, Question 14b on the original license request discloses that Kapsalis had “direct or indirect beneficial or financial interest” in another license, which the commissioners sitting a decade ago chose to ignore. Kapsalis also stood up in a March 18, 2014, meeting and announced to three city commissioners and their executive director and counsel, “I own 991 Mass. Ave. I’ve lived there since 1980. I own The Cellar. I own The Cellar Wine and Spirits” – making Rafferty’s sudden suggestion of an argument about separate corporate ownership curious, especially since Kapsalis’ team arrived ready to make the transfer.

Yet Rafferty had still more argument against the transfer he seemed eager to make: That the city shouldn’t follow the law against overlapping license ownership because Cambridge is exempt from a state law limiting how many liquor licenses can be issued; and because the ABCC made a legislative recommendation last year to change the law, although that change hasn’t happened.