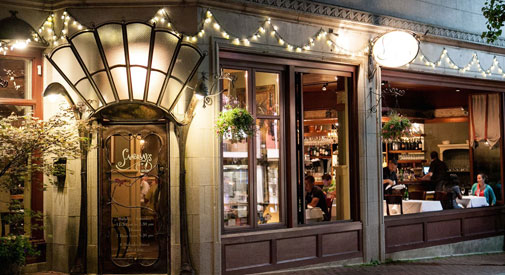 A small-plates restaurant called En Boca looks clear to open in the Sandrine’s Bistro space in Harvard Square this summer.

The restaurant will undergo cosmetic changes and a change of menu, “not French but along the same lines of quality,” said Peter Sarmanian, owner of Classic Restaurant Concepts, which runs The Asgard in Lafayette Square and The Kinsale in Boston’s Government Center.

The menu provided to Cambridge’s License Commission is split roughly in three, with quartets of steak and pork, poultry and seafood of half-sizes costing $6 to $8 and full servings costing from $15 to $21 (the cheapest being a coq au vin with saffron rice, the more expensive dishes including steak tartare, chicken with dumplings and monkfish, redfish and salmon); there are meats and cheeses with half-sizes at $7 and full plates at $18; and greens and vegetables at either $6 or $15 platings. 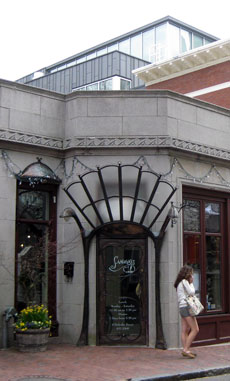 Sandrine’s Bistro declared for bankruptcy protection in December and closed March 30 after serving in Harvard Square since 1996. (Photo: Rose Trinh)

Sandrine’s Bistro, its high-end French cuisine and cozy, accommodating 162-seat space had been open at 8 Holyoke St. since 1996, ending its run with bankruptcy court protection in December, when its replacement was expected to be a project by Pierre Honegger, of La Voile on Boston’s Newbury Street.

By the time managing partner Gwen Trost closed the doors on Sandrine’s on March 30, Classic Restaurants had replaced Honegger.

Holding up the deal until recently: The discovery, late in the process, that the License Commission had long ago granted a nontransferable alcohol license atop Sandrine’s beer and wine pouring license – setting up the illegal situation of having two licenses at one location.

“Our understanding was this was all-alcohol, seven-day, for-value license. We learned it is a no-value license,” McGrail said. That sent the sides back to the table to figure out a new sale price – and to wrestle over how the illegal license would be handled.

“I don’t think Sandrine’s understood what it had,” McGrail said. Trost was contacted for comment Friday, but did not reply.

The commissioners, who had scheduled a May 28 decision-making heard, met two days earlier just to hear the Sandrine’s license case, accommodating the fact that a bankruptcy court hearing had been set for May 27.

McGrail pushed hard for his client to get the same deal the License Commission had granted in June 2014, when Dolphin Seafood was closing and the space was being taken over by Boston Burger Co. The three-member commission voted unanimously to transfer Dolphin Seafood’s all-alcohol beverages license to the new tenant.

But Police Commissioner Robert C. Haas, who had voted yes to the transfer less than a year earlier, reminded McGrail that no-value licenses don’t transfer.

“Except in the instance of the Dolphin Seafood – that was a no-value, no transfer license that was in fact transferred,” the lawyer replied. “There is a precedent that has been set.”

Commission chairwoman Andrea Spears Jackson said there had been “a big discussion in the office” as a result, “because I don’t believe the board was aware at the time that we voted on it that it was a for-value wine and malt license that had been upgraded to a no-value all-alcohol license.”

“My interpretation was, although that set something of a precedent, I don’t know that that was a correct precedent to set,” Jackson said.

McGrail kept returning to the Dolphin precedent, but commissioners steered him to a different precedent – one set just March 31 when hearing a request from the owner of Ten Tables, who wanted to upgrade a wine-and-malt license bought with the restaurant for $35,000 to an all-alcoholic beverages license. Haas worried that an upgrade of the license increased its value “where normally we would be issuing a nontransferable, non-buyable or non-value license.”

As a result, the commission let Ten Tables owner Krista Kranyak turn in her $35,000 beer and wine license and get back an all-alcohol license that would be worth nothing if she sold.

Hearing the commissioners’ push to Ten Tables instead of Dolphin, McGrail said, “We looked at both of those cases and hoped we’d fall somewhere in between.”

But Haas said he didn’t see Dolphin “as being precedent-setting in this case. I am inclined to look at the Ten Tables as being more appropriate [because of] concerns about compounding a potential mistake,” and Fire Chief Gerald Reardon – like the other commissioners, present for the Dolphin vote – agreed that “Ten Tables is the model I would support.”

“We have a new policy in place,” Jackson said.

The Sandrine’s Bistro beer and wine license was physically turned over to the commission May 26, allowing resolution of the case in bankruptcy court.