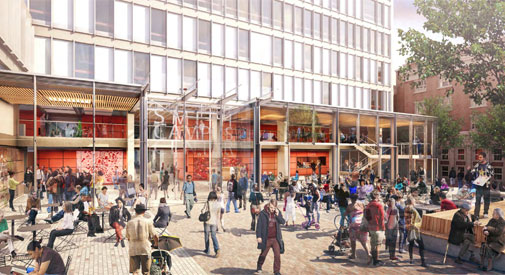 Harvard’s plan for Forbes Plaza at the Holyoke Center include a two-story glass structure that reduces public space. (Rendering: Harvard)

From Jan Devereux of Lakeview Avenue to the Board of Zoning Appeal, June 21: I write to oppose the request by Harvard University for a variance for a two-story glass addition that would significantly reduce the size and compromise the character of the long-standing outdoor public space known as Forbes Plaza.

For more than four decades Forbes plaza has served the public’s need for a large seating area open to anyone at any time. The four mature trees provide a lush green canopy to shade and soften the surrounding urban hardscape that is the square’s main transit nexus. I feel that replacing the trees with a planter, removing the seating corral and enclosing a quarter of the outdoor space to serve as a new welcome foyer to Harvard’s Smith Campus Center would not be in the public’s best interest.

While the plaza’s stonework and furniture could certainly use some TLC, Harvard’s proposed renovation would yield a smaller, reconfigured outdoor space that is not a fair tradeoff for a facelift. The newly enclosed space is clearly designed to serve Harvard’s own needs before the community’s. The hours this space would be open and its programming would be entirely under Harvard’s control, as would any security measures used to screen visitors and to monitor those using the indoor space. (There are “no loitering” signs inside Holyoke arcade, and its indoor seating is reserved for customers only; the outdoor space has no such restrictions.)

Replacing the wall along Dunster Street with a line of stairs invites people to use the plaza as a shortcut between the Smith Center entrance and the T; the seating area would no longer feel like the oasis it does now with a steady stream of people threading their way between the tables and chairs. Any good designer knows that the desire line always trumps what’s on paper; the new plaza design creates a clear desire line straight through the seating area, destroying any sense of refuge from the busy corner’s hustle and bustle.

I have heard that one compensation is that the new enclosure would offer public restrooms – a much-appreciated public amenity, to be sure. But on the plans I can only find one “public restroom” tucked behind the ticketing office on the first floor. Where is the second one? Would there be any signage outside welcoming the public to use the facilities?

Finally, I cannot help but note the irony that this proposal falls under the umbrella of the Harvard Square place-making process. In fact, Forbes Plaza is one of the few public outdoor spaces in the Square with a strong sense of place, which it is why it’s full of life at all hours and in all seasons. If “it takes a community to create a place,” please listen to the many members of the community who feel that this proposal is less place-making than place-taking, and ask Harvard to go back to the drawing board.