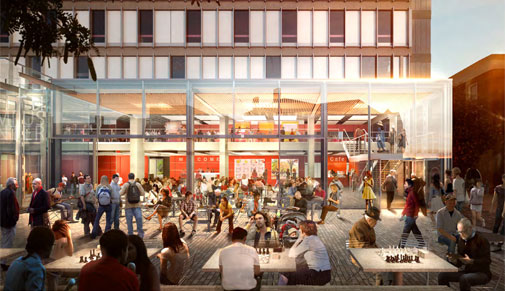 From James Williamson of Jackson Place to the Board of Zoning Appeal, June 22: Harvard is essentially proposing to remake and rebrand the Holyoke Center plaza to become only ancillary to a “grand entrance” to, and relegated to a “front porch” for, a new campus center for Harvard. The idea of a campus center, along with a new Harvard welcome center, is not, in my opinion, a necessarily bad idea. But Harvard is simply proposing to take far too much of the existing Forbes Plaza and proposing far too radical a reorientation of what would remain, in a manner that would dramatically undermine the historically established and codified public interest in and use of the plaza, to warrant granting any variances at this time.

Harvard does not need to diminish the plaza to achieve its goals. The public has been able to enjoy Forbes Plaza for more than 45 years, and there is no reason Harvard can’t have a new campus center while still respecting the public enjoyment of this important outdoor public open space in Harvard Square. The “two-story glass box” – a “pavilion” in officials’ words – Harvard is proposing to add across the entire facade of Holyoke Center simply extends too far out into, and is an unnecessary encroachment upon, the existing plaza. Harvard does not need all the space it hopes to take from the plaza to have a successful campus center.

The plans entail a radical reorientation of the plaza away from the public sidewalk along Massachusetts Avenue and toward the new entrance to their proposed new campus center. This is a serious mistake that would completely obliterate the pleasure that comes for so many (including many Harvard “affiliates”) from sitting in the raised terrace area of the plaza and watching the world go by while enjoying the serendipitous encounters with friends and fellow citizens that happens only with something like the current configuration.

Putting seating behind a new “planter” while removing the wall along Dunster Street will create an environment where pedestrians will be streaming through this new area as they head on a diagonal from the Harvard T Station toward the new campus and welcome center, undermining whatever repose the public might hope to find. No one will be any longer able to enjoy a view of the sidewalk from this rear enclave.

Harvard claim to have “talked to the chess players,” but none I have spoken with have been aware of Harvard’s plans and, on learning of them for the first time in any detail from myself, none are happy with the realignment of the chess tables behind the planter. Harvard should be required to prepare a 3-D model of their proposal for the plaza, something it can surely afford to do, so the public and the Board of Zoning Appeal can better understand and evaluate the full scope and implications of the plans.

Representatives of Harvard have made “promises” regarding public access to portions of the new campus center, but these should be clarified and put in writing now, and made a condition of the granting of any variances, rather than allow Harvard to wait until the renovated building’s projected opening in the fall of 2018 when officials may well decide after all that they “can’t” allow quite the kind of access they now say is their intention. What will happen when Harvard is on vacation? Or during the January term, when 85 percent of Harvard students are expected to be off-campus? Who will decide when the new “welcome” center will remain open? Harvard? A new restaurant/cafe tenant? All of this needs to be cleared up now before granting any variances.

Finally, it’s my understanding that there should first be a finding of a hardship before granting variances. Is this true? What exactly is the “hardship” here for Harvard?

Holyoke Center’s architect, and Harvard’s first dean of the Graduate School of Design, Josep Lluis Sert, was a refugee from Franco’s fascist Spain in the 1930s and understood the importance of public plazas; he brought an appreciation for this precious public amenity more typical of Europe with him to America, and to Harvard Square. We, and the BZA, should be very careful not to allow shortsighted, misguided and institutionally self-centered and self-aggrandizing ambition to trump preservation, and any thoughtful improvement, of this important legacy and gift to Cambridge from one of Harvard’s own.