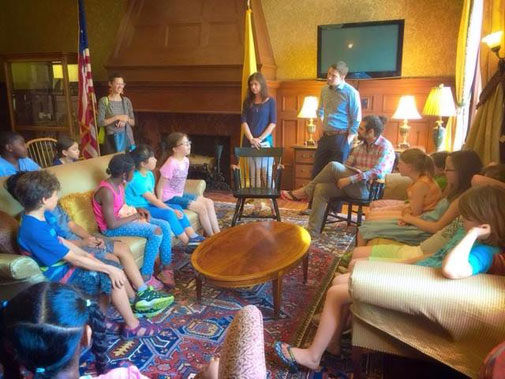 Cambridgeport School third- and forth-graders lobby at City Hall in early June for a library box installation in Sennott Park. Third-graders were also active in expanding the history books they use to study the Revolutionary War. (Photo: Cambridgeport School)

The final School Committee meeting before summer looked forward to topics affecting the coming academic year, such as the replacement of a resigning principal at the Vassal Lane Upper School and how students and parents learn the rules – including about alcohol and marijuana use – in an increasingly big handbook of rights and responsibilities.

But one topic June 16, in a 2.5-hour meeting that segued through various unrelated agenda items and motions, bookended by plaudits for jobs well done and admiration for initiatives launched, could reflect a districtwide change in curriculum led by some of the district’s youngest children.

A motion brought forward by committee member Fran Cronin requested that books about unrecognized Revolutionary War heroes, such as black men and women not mentioned in traditional history books for children, “be purchased for all elementary schools in Cambridge.”  The origin was a request by third-grade students at the Cambridgeport School that was sent to all the committee members, most of whom were so moved they visited the class, with member Patty Nolan delivering some of the requested books in person.

Committee member Mervan Osborne wanted to honor the request by taking further action. “It’s important that the students understand that this made it all the way here and we’re actually debating it,” he said. “This is actual civic action. These kids will never forget that this happened. I hope we come together and find a way to honor the spirit in these kids.”

The children wrote letters that were “fantastic, articulate, passionate” and showed evidence of significant research, Cronin said. “I felt so moved that they had to be acknowledged for the work they had done.”

But Cronin and Nolan wondered if the schools have the budgets they need to buy the books. “I’d like to say that should be another conversation,” Cronin said. “Because the students had this kind of advocacy, came to us directly, we were able to show we were able to be effective, we were able to show that we could respond. I think it is a huge lesson for them and a great acknowledgement of their efforts, and that’s the spirit in which I presented that motion.”

Committee member Richard Harding hoped that the school’s effort started “a wave across the school district” around the Revolutionary and Civil War because “there were many heroes from both wars who are just unknown. It may be time to look at this from a deeper level” regarding history books available to Cambridge students.

“Our students are amazing thinkers. They are raised in Cambridge to be advocates for a cause, for a purpose, for doing the right thing. This is one of those right things,” Turk said. “I would also hope we would not lose the voices of students as they are perhaps helping to plan out with the adults some of those books that will be purchased, rather than saying ‘Here’s one set of books decided by just one group of people’ and that’s it.”

The activist third- and fourth-graders at the Cambridgeport School also lobbied City Hall – successfully – to pay for and install a Little Free Library in nearby Sennott Park. 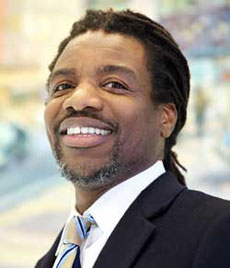 Harding had concerns about the Vassal Lane Upper School, where head of school Jamel Adkins-Sharif announced his resignation in May – saying at the time he intended to “pursue other professional opportunities” but lashing out later in the month at a committee roundtable with complaints about interference from “loud and entitled parents who never wanted upper schools.”

There are two appointees for interim principal identified for the school, and Harding asked why.

It was about availability, Superintendent Jeffrey Young said. Tobin Principal Barbara Boyle will be head of school for the first half of the year, and Graham & Parks’ former assistant principal, Barry McNulty, will be around the first part of the year but take over as interim principal in January. The normal timeline for a search for a permanent Vassal Lane head of school would be followed throughout.

A motion about the Rights & Responsibilities Handbook had committee members grappling with how effective such a huge document could be in communicating key matters of importance to families and requesting clarification about suspensions and substances such as alcohol and marijuana.

Committee member Kathleen Kelly began, noting that the handbook’s size brings into question whether it’s read in its entirety by students and parents. She wondered, for equity’s sake, if there were some additional way all parents could get information more easily when they are required to act, such as notifying the school if a student will be absent, or when they can take advantage of a particular part of the policy, such as the appeal process for suspensions. Cronin also wondered if there could be a summary version.

There’s a shorter Guide to Policies that goes out to students and families – but it’s lengthy too, often because certain notices by law require a lot of information to be included, said the school department’s legal counsel, Maureen MacFarlane.

During discussion of the document, members learned:

Cambridge Public Schools cannot mandate that a student get counseling for an alcohol problem.

Whether a student is suspended or expelled for first-offense possession of substances such as marijuana or alcohol is at the discretion of a principal. “At the high school it’s been quite a while since we’ve had a student expelled for a first offense of alcohol or marijuana possession,” Chief Operating Officer James Maloney said.

In other actions and discussions, Jake Crutchfield, part of a science, technology, engineering, arts and mathematics working group started by city councillors Dennis Benzan and Nadeem Mazen, reminded the committee that the next community meeting of the group is at 1 p.m. Monday in the community room of the Cambridge Main Library, 449 Broadway. The city and school department has to decided to set aside $200,000 to invest in a Steam coordination position “to better facilitate and organize our vast network of Steam-focused programs.”

Nolan wanted confirmation that there would be no cap on students who wanted into the Advanced Math Pathway course, and Jessica Huizenga, assistant superintendent of curriculum and instruction, said she expects the AMP sections to be expanded because they want to “include as many kids on the cusp as possible,” offering more information this week.

Lesley University was thanked by several people for its four-year partnership in bringing classroom technology integration to the Kennedy-Longfellow School. Commenters included students who enjoyed learning Scratch and Python coding languages and mentioned that even the KLo kindergarteners learn to program with Scratch Jr. One parent suggested that the program be put into all Cambridge schools.

“This is not the end of a partnership,” Nolan said. “This is the end of a particular phase that was a startup … now the school is fully capable of continuing so that future students can benefit from it.”