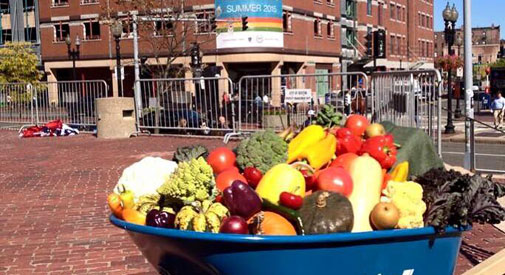 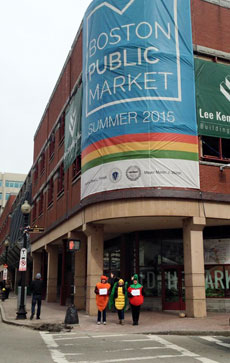 Five Cambridge and Somerville vendors are among the roughly three dozen stalls in the 28,000 square feet above the Haymarket MBTA station. (Photo: Boston Public Market Association)

The market, at 100 Hanover St., Boston, will be open 8 a.m. to 8 p.m Wednesdays through Sundays, selling stuff from throughout New England – fresh produce, meat and poultry, eggs, milk and cheese, fish and shellfish, bread and baked goods, flowers and an assortment of specialty and prepared foods.

“Our vendors will be selling hundreds of products from over 200 local small businesses,” its chief executive, Liz Morningstar, said in a press release. “We’re proud to support over 200 jobs and to have built a home for the local food economy in Boston.”

So what familiar faces will Cantabrigians and Somervillians see at the market?

The Somerville offerings include the unfortunately named Mangé – note the accent, which makes this French for “eaten” and not English for the skin disease – selling its fresh fruit vinegars and dressings trucked over from 30 Summer St., Prospect Hill.

Q’s Nuts, the family-owned artisanal nut roaster at 349 Highland Ave., near Davis Square, has 20 original recipes roasted in small batches to choose from, including sweet, savory and spicy flavor combinations.

Taza Chocolate sells a variety of Oaxacan chocolate flavors in distinctive disks or as full-size or smaller bars, all starting when founder Alex Whitmore sampled his first stone-ground chocolate while traveling in Mexico in 2005. The base of this empire is the factory at 561 Windsor St., between Inman and Union squares.

Union Square Donuts has been a phenomenon since its launch two years ago with its 20 kinds of gourmet doughnuts (not to mention doughnut holes and “savory squares”) made from scratch, by hand, every day with glazes, sugars, jams and creams created in-house. Its maple bacon, chocolate-covered pretzel and sea-salted bourbon caramel treats are at 20 Bow St., Union Square.