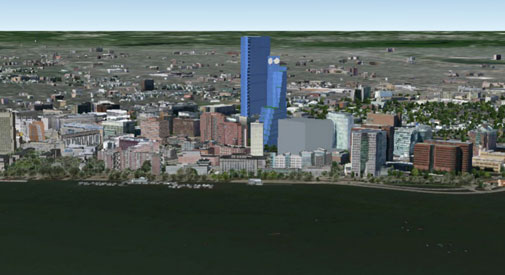 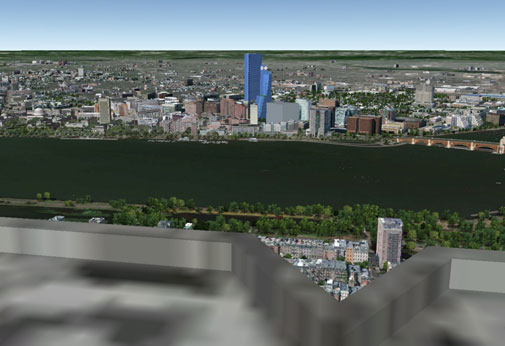 If the proposed density of the Volpe site in Kendall Square were put into two towers, this would be the view of Cambridge from Boston’s Hancock Tower, as rendered by Tom Stohlman. (Image: Google Earth)

The zoning amendment that will shape the 14 acres of Kendall Square holding the federal John A. Volpe Transportation Center arrived on the City Council’s desk fully formed, via the Planning Board and Community Development Department. Staff there and with the federal government had many internal meetings with many participants to decide the zoning. It has taken months to prepare. And although the public has pleaded to be included in the decision-making early and often, this Monday is the first chance to do so.

The combined meeting of the City Council Ordinance Committee and Planning Board, for which the council canceled its last regular meeting before the summer break, is at 6 p.m. Monday at City Hall, 795 Massachusetts Ave., Central Square.

The Volpe amendment and explanatory materials weigh in at a little under a half-pound when printed. It’s a dense read, full of legal jargon, some key ingredients, exceptions and important distractions.

It may result in a beautiful thing when the spaces are finished. It’s hard to tell now. It’s only ingredients, after all.

The important distractions are things such as housing for all, sustainable building, ground-floor retail and innovation spaces. These are all great. They should be included in any zoning. Transportation issues are a serious concern, but there are few requirements in the zoning beyond the usual traffic studies.

There remain a few key ingredients that will have a profound effect on the design of the project: floor area ratio, the housing and commercial mix, open space and height.

Floor area ratio is the ratio of building area to lot size. Downtown Manhattan has an FAR of 15. The Back Bay (the Charles to the Hancock Tower, but including the tower) comes in at 2. Most residential neighborhoods in Cambridge have a floor area ratio of less than 1.

The Volpe site will be very dense with buildings. Imagine the whole 14 acres covered by a five-story building. Or put all of that building area in a couple of skyscrapers. I did in the image at the top of this post and in this video:

In 2011, the city manager appointed the Kendall Square Advisory Committee to plan for the future of the square. I attended almost every meeting. There was a strong argument by residents that more housing and open space are essential to a vibrant Kendall Square. The neighbors even hired a consultant to draw up a plan with their input and made T-shirts with the mantra “Live, work, play.”

They asked the question: What business-to-residential ratio makes for a vibrant neighborhood? Kendall’s ratio is very high, a whopping 3.5. In San Francisco’s Mission Bay it’s 0.7, in Hamburg’s Hafencity it’s 1.6 and in the Back Bay it’s at 1.3.

The recommended increase of the current floor area ratio to 4.5 from 3 results in a bonus of almost 1 million square feet more than the current zoning allows. The great majority of this extra square footage will go to commercial space. This is contrary to the multiple schemes presented for the Volpe site by the advisory committee, such as you see in the rendering at the bottom of this story. The committee schemes called for extra floor area ratio and puts most of it in housing.

Walking around the Volpe parcel in a virtual model also shows that commercial space will dominate the ground uses. It’s hard to experience this problem by just looking at plans. Residential use, specifically walk-ups, adds special life to the street and is missing in this zoning.

Although a Volpe developer is allowed to provide the housing that is needed, it is more likely that the more profitable commercial space will continue to dominate the development mix. The proposed amendment falls short in requiring more housing.

Every Kendall Square study group in the past decade has recommended that the amount of open space for the Volpe parcel remains at 42 percent of the lot area, with most of it available to the public. The proposed amendment falls short.

Building heights are both a distraction and a key ingredient to the Volpe amendment. Once a building creeps over five stories (one story equals 10 feet), people on the street and occupants in a building begin to lose visual contact and chances for interaction.

Tall buildings affect natural daytime street light; the reduction of sky increases quickly as a building goes from one story to around 10 stories. The reduction begins to flatten out as the buildings get higher. In other words, there is little difference to people on the street between a 10-story building and a 20-story building. The difference is much more pronounced when one gets farther from the immediate neighborhood.

What’s in it for the neighborhood, besides reduced sky and weird wind effects? In theory, open space. In other words, giving height without getting open space is a bad deal.

The richest city in Massachusetts

If nothing is built, Cambridge will remain the richest city in Massachusetts.

It is hard to see, from Cambridge’s point of view, the urgent need to pass a Volpe zoning amendment that, while it may maximize the parcel’s value to the U.S. government, does not contain all the ingredients for a livable city.

Who decides for Cambridge? 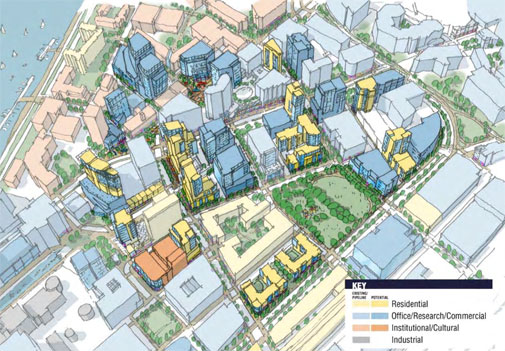 Before Monday’s public hearing, the owners of the Volpe parcel decided what zoning was best for them; the CDD enabled their vision; the Planning Board submitted it to the city; and the city Council will soon vote whether to go along.

Here are my suggestions:

Lower the commercial maximum (thus increasing the residential minimum) to 40 percent from 60 percent. Put most of the extra floor area ratio square footage into housing, not commercial square footage.

Keep the open space requirement at 42 percent or even larger in return for greater heights. The heights can be flexible, even unlimited, but only for open space in return.

Keep all those requirements for housing for all, sustainable building, ground-floor retail and innovation spaces. Don’t just use them as excuses or justifications for 700,000 square feet of new commercial property.

And address the sleeping giant of any Kendall Square proposal: How will this development affect a transportation system that is already broken?

It remains to be seen whether the public’s collaboration will have any effect at this late date, since much has already been decided without them.

Tom Stohlman is a Massachusetts Institute of Technology graduate and Cambridge architect and planner.