‘Cartel Land’: Border vigilantes are heroes when it’s makers of meth on the other side 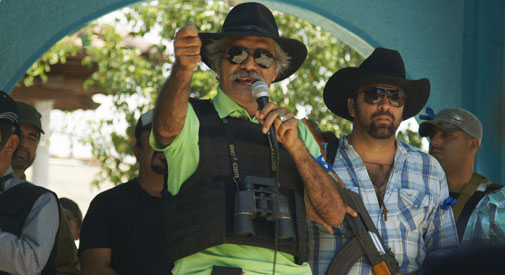 ‘Cartel Land’: Border vigilantes are heroes when it’s makers of meth on the other side

The documentary “Cartel Land” from Matthew Heineman – and boldfaced produced by Kathryn Bigelow – is a stunning exposé of the lawless southwest along the U.S.-Mexican border, where the crystal meth drug trade thrives and vigilante forces on both sides of the fence try to stem it. It’s nothing short of “The Wild Bunch” meets “Traffic,” sans the cathartic denouement. 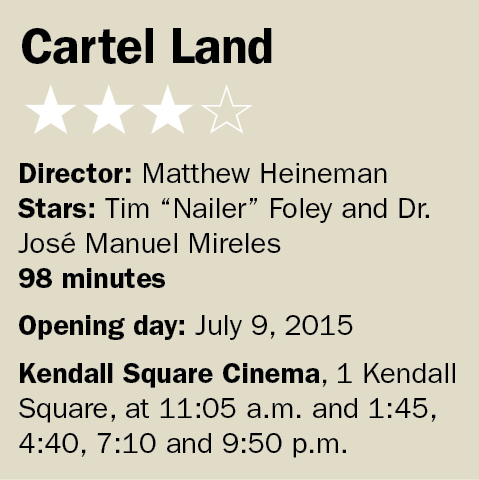 Heineman gained a perilous unlimited access to his subjects; it might be more accurate to say he’s embedded. The film begins with the steamy nighttime capture of an outdoor meth lab where the brewers wear bandannas to conceal their faces from the camera – and the noxious vapors. They do what they do out of opportunity. “As long as god allows it, we make drugs,” one offers meekly. They learned how to make their cocktail from an American chemist and his son. (Maybe Walter White is still kicking around?)

From there we meet Tim “Nailer” Foley, who leads Arizona Border Recon and is listed as an extremist by the Southern Poverty Law Center. He and his posse are well-armed, skilled and intrepid and never seem all that extreme, though some of their philosophies on other races and their intermingling might gain Donald Trump’s assent. Foley is a man’s man in every sense, lean, angular, philosophical, survivor of a hard life and tragedy, and he’s charismatic to boot.

You could see “Nailer” in a Clancy novel or Peckinpah movie, as well as Dr. José Manuel Mireles, who across the divide leads a paramilitary Autodefensas group that liberates villages from the tyranny of the drug cartels. Mireles, tall, striking, with a broad mustache, looks something like Robert Ryan in “The Wild Bunch,” and when we meet him he seems to have the popularity and adoration that followed Pancho Villa. About the only ones who have issues with his bringing stillness and order to remote outposts are the drug dealers, kidnapers and Mexican authorities, who as Heineman has it look to be complicit with those corrupting agents – a point that doesn’t get well explored.

Foley’s reflection on his troubled past and the revelation that Mireles is a surgeon by day and a grandfather give depth to the men and their community, while chaotic scenes of gunfire – with Heineman right in the middle of it all filming – fill the screen. It’s gorgeously shot and a step up for Heineman, whose last doc, “Escape Fire: The Fight to Rescue American Healthcare” was a heavy handed look at the ills of the medical/insurance industry. “Cartel Land” is much more organic and visceral, and the image cut by the two figures, both fearless and fighting their own righteous war, is legendary in scope, even if the pendulum or reality says differently.